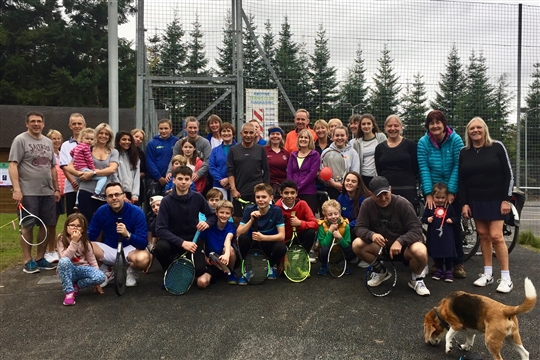 With a booming membership of around 200 players, in October 2015 the club embarked on an ambitious project to complete renovate its four worn out concrete courts.  These were also being badly damaged from the roots of around 40 large Douglas Firs adjacent to the perimeter fence, which required removal. The existing floodlighting on two courts was inadequate for tennis and needed improvement too.

A project team was set up to handle grant applications, as well as the technical and commercial aspects of the project.  It had some great help on the way, particularly the advice and £50,000 funding from sportscotland (National Lottery), as well as technical input and £10,000 funding from Tennis Scotland. Also critical to meeting the £170,000 project cost was the financial support of two landfill community trusts, with WREN contributing £50,000 and EB Scotland £10,000.

A huge fund raising effort was launched in late 2015 to double the club's existing funds from £25,000 to £50,000 in order to meet its contribution to the overall £170,000 project cost. A energetic membership, along with supporters from beyond the club, organised ceilidhs, race and quiz nights, duck races, bag packs, jumble sales, golf tournaments, lunches and suppers and individuals ran, biked and braved the Banchory Beast Race to meet the fund raising target in just 24 months. That's quite an achievement by a relatively small community such as Aboyne.

Over ten weeks, from July to early October 2017, the trees were removed by Craig Nicoll Timber, new porous tarmacadam courts were laid (on the broken up and compacted concrete surface of the existing courts) by Hunter Construction and fantastic new high quality, low energy LED floodlights were installed on all courts by Halliday Electrical, powered by a upgraded new electrical supply installed by SSE.

The courts were re-opened on 8th October 2017, just 24 months after starting with a blank sheet of paper. The fully renovated facilities should last for another generation, if carefully maintained.  This remarkable effort, which will secure Aboyne's place as an important tennis development hub in West Aberdeenshire, is something that everyone who has been involved can be proud of.