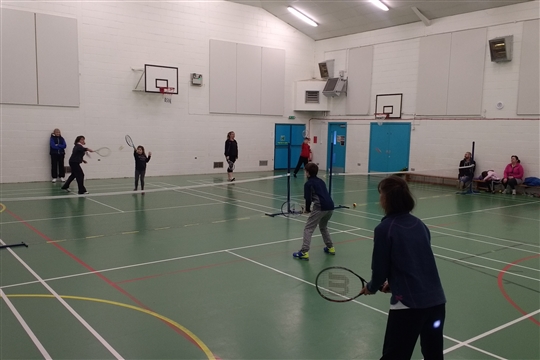 On Sunday 19th February, eight brave couples prepared to put family relationships on the line in a Parent-and-child mini tennis tournament. Despite the ironically fine weather outside, it was enjoyable to try a new format and the indoor environment, together with short racquets and softer balls, put a premium on touch and control - qualities which were fantastically demonstrated by all of the kids involved.

Emerging victorious after a series of round-robin stages were Ruairi and Wendy Lamont who breezed past all-comers in considerable style but since they played with such restraint and sportsmanship it was hard to resent them too much! Congratulations to you both.

Strong performances could be found all over the hall but Immy Rees and Alfie Scripps deserve special mention for their 2nd and 3rd place finishes (together with Fi & Jonno of course!). Nearly every match was closely fought and Oscar, Jamie, Toby, Kip and Hannah carried their partners along brilliantly through thick and thin.

Finally, thanks to Elaine for her efforts in making this happen and to everyone who participated for their involvement and great attitude which helped to make it a fun morning - hope you all enjoyed it.

Here's looking forward to some outdoor action as the season warms up...