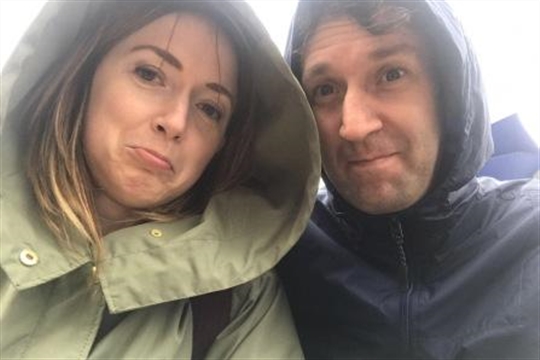 Over a dozen members and their guests attended the Wimbledon Championships this year after obtaining tickets via the club or public ballot.  Almost all of them enjoyed superb weather as they basked in the summer heatwave.

However, spare a thought for Club Secretary Vicky Huntington and her boyfriend John Duff who had the misfortune to be the only pair for whom rain stopped play. Consigned to a roofless Number One court, Vicky and John had to first of all endure a very stressful train journey which saw them forced to change trains unexpectely at Milton Keynes, take a cab to pick up a train on another line, arriving late to Wimbledon.

As if that were not enough, the day they attended was the only one on which heavy rain fell. Vicky and John managed to see just the one ladies' match before play was transferred for the rest of the day to Centre Court. To add insult to injury, Vicky and John were denied a refund because they saw just  FOUR minutes' play over the two hour minimum needed for a refund!

Vicky and John put on brave faces but Vicky admitted it was very disappointing: "It was such a shame that, after a really stressful journey, we only managed to see the one quarter final match although it was great to see some tennis. We couldn't believe we had the bad luck to be the only ones from the club to have rain. Just when we thought it couldn't get any worse, we arrived back at our hotel to find that the TV in our room was broken so we couldn't even watch the highlights!"

Meanwhile, lots of members enjoyed some amazing tennis, including Margaret Dent and Elaine Phillips who were lucky enough to be on centre on ladies' quarter finals day, seeing four matches.  Sam Marsden who snapped up men's semi-finals tickets in the club ballot saw some fabulous tennis, and Amber Wood  was lucky enough to acquire tickets to see Roger Federer win his record - breaking eighth Wimbledon title.

Look out for details of how to enter both the club and public ballot which will be posted on the notice board in September.

And better luck next year Vicky and John!