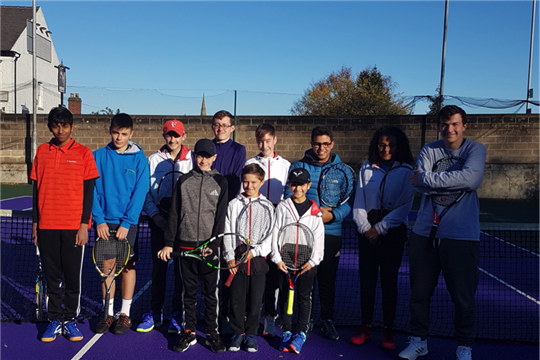 Eleven very enthusiastic players took part in the Match Play Doubles Tournament which is held each term at the club.

In this particular tournament. each player gets to play with all of the other players so it was always looked likely to throw up some intereting pairings, and that inded proved to be the case! The players involved were Danny Corner, Cameron Stewart, Jack Triptree, Jack Benton, Evie Smith, Omar Haroun, Ollie Leonard, Liam Ambler, Steven Mchale, Michael McHale, Rithikkesh Kumar. John McHale, a token parent, completed the set.

The event took place on a sunny day and the tennis was a uplifting as the weather. Coach Alison Smith who organized the event said: “There was great competitive spirit from each player but there was also a lot of fun. There were lots smiling faces, some awesome tennis, lots of high fives, and a sportsman’s reaction whoever won the point.”

Alison also commented that: “As the players work so hard all year round, it was a nice change to see them playing with so much quality, yet in a relaxed manner. I am very privileged to be involved in influencing these young people.”

This time, for the first time in all the years of holding the Doubles Tournament, there were joint winners in the form of Danny Corner and Steven McHale. Many congratulations to them.