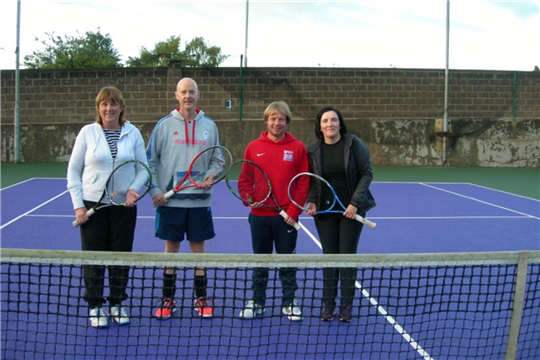 This year’s finalists were June Leafe & Dave Hughes, Tracey Wright & Duncan Coates and it proved to be an exciting match, played for the most part under the flood-lights. There was support in equal measure for both teams watching in the warmth of the club-house bar on a very chilly evening. Dave was struggling with a chesty cough, which he didn’t blame on the ‘Jungle Strength’ midge repellent that was being liberally applied before the match.

After the 1st two games, which took nearly 20 minutes to complete, the scores were level. A number of breaks of serve followed, but despite being 0-40 down, Dave was able to hold his service to close out the 1st set 6-4. Some superb tennis was played throughout this set, excellent smashes and volleys at the net by both ladies, and some excellent rallying cross-court by the men, both getting back balls which looked to have been lost causes.

June & Dave got off to the kind of start in the 2nd set that Tracey and Duncan would likely find it difficult to recover from. Despite a valiant effort, this proved to be the case, and the set was won 6-1 moments before heavy rain set in for the night.

Final score was 6-4; 6-1 to June & Dave: congratulations to them and commiserations to Tracey & Duncan.