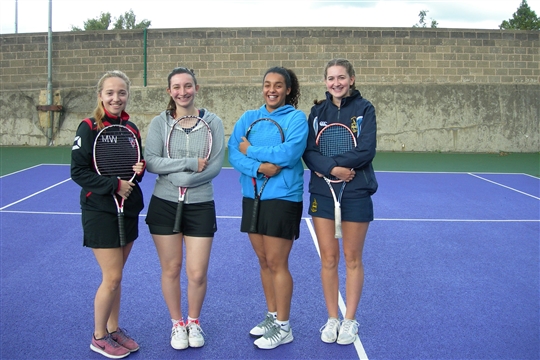 This final was played on a dull day in September. Even though the warm-up was interrupted by a light shower, the match itself brightened up the afternoon.

Once the ladies overcame what looked to be a few nerves, the play proceeded at a really high standard and despite what the score-line might suggest, the match was very competitive, with many games in both sets going to deuce.

All four players were hitting good groundstrokes, Jasmine’s backhand becoming more effective as the match progressed. Once Sophie and Jasmine got themselves ahead in each set, despite all their best efforts, it was not possible for Amber & Alice to make a comeback.

This match was played in the very best of spirits and despite their disappointment, Amber & Alice were still smiling as they shook hands with the new champions.

The trophies were presented by Jean, who received a bottle of wine as a token of the players’ thanks for her time in the big chair.