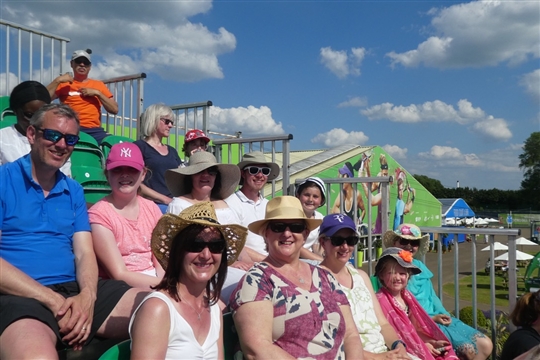 On a scorching  Sunday in June, members of Burton Tennis and Squash Club attended the Aegon Open in Nottingham.  In the middle of the heat wave and with no shade on offer, it is little wonder that everyone was well covered up, with sun cream liberally applied, as they settled down to watch a fantastic full programme of tennis which included both the men's and women's finals as well as that of the women's doubles. The latter was the first match of the afternoon and saw Great Britain’s Laura Robson and Jocelyn Rae take on Australian pair Monique Adamczak and Storm Sanders. After two tight sets it went down to a third set tie-break and with the Ausies winning 10-4 to take the trophy.

It was then the turn of the men with world numbers 103 and 104 competing in a hotly contested final. Israeli player Dudi Sela came back from one set down to win 4 –  6 /6 – 4 /6 – 3 against Italian player, Thomas Fabbiano. Finally, it was the turn of British number one Johanna Konta who, with great support behind her from most of the crowd, including the Burton contingent, went a set up and against Donna Vekic. However, after a tight second set tie-break, Vekic won the decider 7 – 5.

Not only was the tennis brilliant to watch but also, with a courts to play on, a fast serve area and targets to hit there was lots to do off-court too. Because it is a much smaller venue, getting up close and person to the players was not problem either. This meant we managed to get several of the players' autographs and even a signed ball used in the match, which Donna Vekic hit into the crowd after her victory.

“It was a great day of high quality tennis and it was brilliant that for many it was their first time seeing  live tennis, ” Duncan Coates who organised the trip commented. “With repeated requests, I hope this trip will become and annual one and we can get even more people attending next year! Thank you to all who came along and for making the trip possible.”