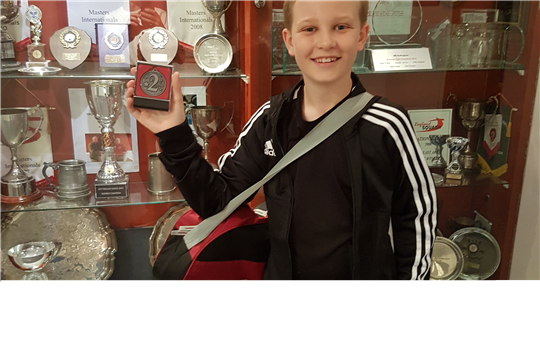 Junior Squash player Liam Morton had a taste of success in a recent tournament.

A relatively new player, Liam has evidently caught the eye of experienced squash coach, Carol Wood, who recommended him to the Derbyshire County Squash Team, with whom he has been training for three months.

Liam was runner-up out of the six players in his group. After a hard-fought 15-12 loss in the first round, he came back strongly to win all of his remaining games. In the final game, in which he needed a win to take the runner-up spot, Liam demonstrated concentration and determination to recover from 12-14, taking the next three points to win 15-14.

Naturally Liam's parents are very proud of their son's achievement. Mum Michelle, who never misses a game, expressed her delight: "It's great to see him playing so well; he really enjoys his squash and it was so good to see him work so hard, coming from behind to win."

Liam's dad Jason echoed his wife's comments: "Liam is aware that he has a very long way to go but, with the fantastic support of Carol Wood, Owen Whitfield and the Derbyshire crew, if he pushes himself all the way, he has a great opportunity."