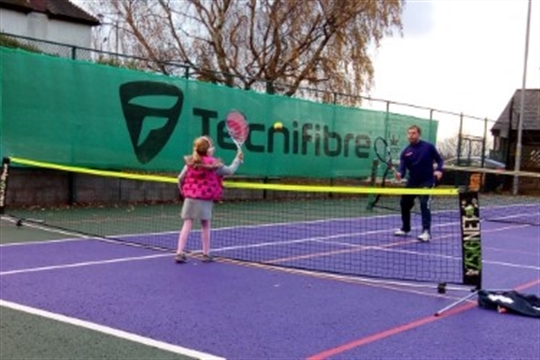 The LTA Mini Tennis Awards have become a significant part of what we offer on the junior programme at Burton Tennis and Squash Club since 2014, when we ran our first Awards Day. This year, twelve mini tennis players came to the club to test their skills and try to pass their respective award.

With half the junior players attending for the first time and attempting the first award (Mini Red 5), it was very exciting to see them successfully put together their shots. Passing the awards is, however, not a foregone conclusion: awards have to be properly earned. Nevertheless, the majority did pass and can now move on to the next award to continue challenging and improving their skills. Those who were not successful this time around will continue to be encouraged to improve by working on those areas they found most challenging. Hopefully, they will come back with new resolve ready to attempt their awards again.

Back on that first Mini Awards Day, a six year old called Leo attempted and passed his Mini Red 5 award performing basic rallies, volleys, serves and scoring to obtain the award. Now 9 years old, Leo came to the club on Awards Day with one aim: to pass the final award, his Mini Green 20.

This advanced award requires a great deal of effort and technical skill. Successful candidates are required to hit 20 forehands and backhands across court from the back of the court in just ninety seconds. Leo also had to  hit 20 out of 25 volleys into the court, including 5 smashes; he had to deliver 7 out of 10 overarm serves to a particular side of the opponent; compete in a match whilst keeping all of the scores, and choose and execute 6 different tactics in order to help him win points.

This most difficult award has challenged Leo before to the point of failure. However, on this day Leo came prepared and having worked hard in group and individual lessons. His industriousness and determination to succeed paid off as he was able to pass every test. In  doing so, Leo became only the second club junior to reach this level. He also became the first boy to be successful at every level, right through from the Mini Red 5 to the Green 20.

“It was great to see so many there for the first time and able to challenge their tennis skills with the competition side of things being more against themselves, rather than against each other", said Club Coach Duncan Coates. “Leo has shown excellent commitment to the mini awards, hardly missing a single one and, even when he has not successful, he went away and worked hard to pass it the next time. Well done Leo and all those who attended the awards!”