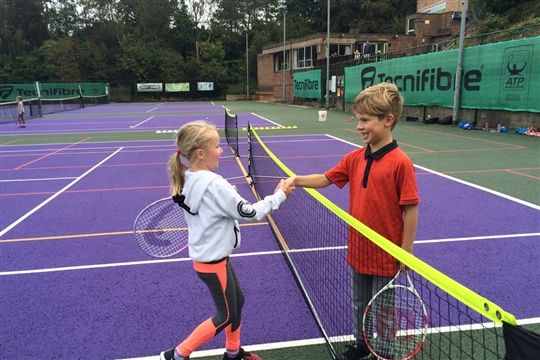 In October, players in Mini Red, Orange and Green competed in their respective match plays. With 25 competitors across all three groups, this was one of the highest attended tournaments in recent years, and made for some highly competitive matches.

For many Mini Red players this was their first ever match play. However, this did not stop them from trying their hardest and showing great potential for the future. After all the games were completed, it was Sam who once again finished the day unbeaten, with Eliza finishing a strong second.

Next were the Mini Orange players who had the closest matches of the day, producing a high level of tennis throughout.  Several matches went to a tight 3 sets with players saving match points, including the eventual winner, Leo, who saved match points in the semi-final. Celia was runner up who beat last term's winner in the first round match.

Finally the Mini Green group took part. This group had the smallest number of entries meaning that everyone could play against everyone else. Sibi won every match and took the title with Dylan, who lost only to the overall winner, as runner-up. A special thank you goes to all the umpires who were an amazing help during these matches, helping to score and also giving encouragement to the players.

Coach Duncan Coates who organised the tournament was extremely pleased with the turnout and indeed the whole day: “Such a high a number of players attending the match play is a sign of how the Mini Tennis  Programme and the club itself is going from strength to strength. The numbers are consistently increasing and those attending are even more committed to their tennis.”

To see pictures from the day follow the link