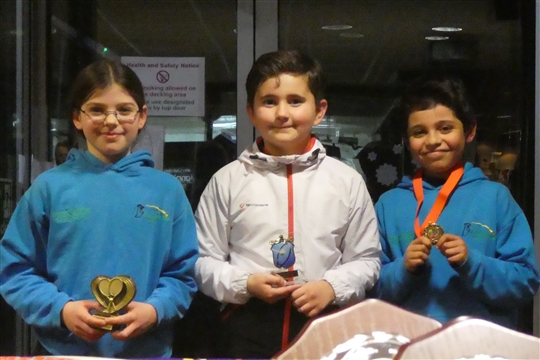 The Junior Coaching Presentation Evening in December is always special. With Christmas just around the corner, it sees recognition of the achievements of established junior members as well as those of the new recruits who joined in the the latter part of the summer, and finally, the awarding of the trophy to the most improved player as well as the fitness award.

Club President, Heather Green, opened up proceedings, warmly welcoming all of the attendees.  The awards evening began with the Mini Match players and award attendees receiving their well-earned certificates, medals and trophies. All three mini groups (red, orange and green) took part this term, with more than twenty children competing. Once these accolades had been handed out, a special thank you was given  to Jasmine, Cameron and Cory in grateful recognition of their dedication in enthusiastically giving up their Saturday mornings every single week, whatever the weather, to assist with the younger players' development. They continue to prove themselves invaluable in contributing to an ever-growing mini tennis structure.

The older juniors received their medals and trophies for the Doubles Match Play which was followed  by the presentation to Sophie and Jasmine of their Ladies' Doubles trophy which they won for the first time in September in the Club Championships.

The last two awards of the evening were presented  by County Councillor Conor Wileman, who is a great supporter of the club. Councillor Wileman presented Steven McHale with the coveted Most Improved Player Award. Steven  has shown great determination over the last twelve months, despite some set backs, and this has shown in his continued improvement.  Finally, Club Chairman, Shaun Baxter, presented the fitness award to Jasmine Smith who was a prominent contender last year for the award, but who claimed the accolade this year for her stand-out performance in fitness sessions this year.

Thank you to everyone who attended this evening dedicated to the fantastic achievements of the club's junior players.