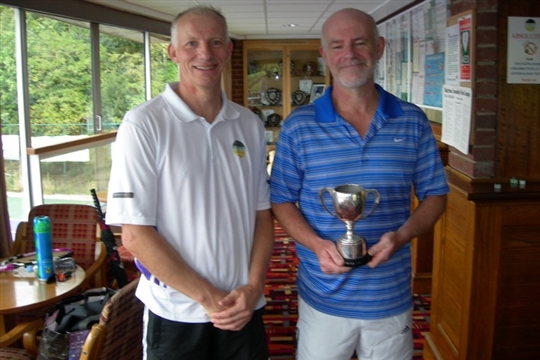 The question everyone was asking was whether Paul Jobson could break Andy Brown-Dawson’s strangle-hold on the Veteran’s title and it would take a match of nearly 2 hours duration before we had our answer.

Andy got off to flying start in the 1st set, taking a 3-0 lead, but Paul came back strongly to level the match at 4 games all. The set looked to be heading for a tie-break, but Paul was unable to hold his serve giving Andy a closely contested set 7-5, with some excellent rallies and play by both men.

It was very even in the early stages of the 2nd set, with Paul having a break point for a 2-1 lead, which he just failed to convert. Andy made his move in the 6th game of the set, breaking Paul’s serve to consolidate his lead 4-2. Paul did have an immediate break-back point in the next game, but again, Andy served well to move further ahead. An eventful final game saw Paul break a string serving championship point down, he kept his composure to make his 2nd serve with a replacement racket, but Andy nicked the point to claim the trophy with a 7-5; 6-2 win.

Andy was magnanimous in victory and Paul was gracious in defeat; Both guys are looking over their shoulders as we seem to be getting a few more gentlemen of a certain age at the club.