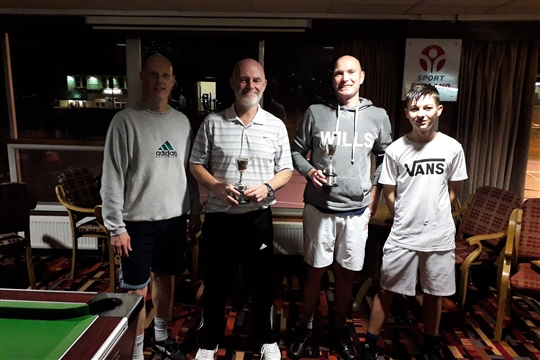 This year’s final was contested by Dave Hughes & Adam Nall, Andy Brown-Dawson & Jonathan Tyson in really poor weather conditions. Following constant rain all day, the match did actually start under the lights in the dry. Shortly after Adam had served to take the first game of the match, the weather began to deteriorate. Play continued, with Andy and Jon making rapid progress to take the first set 6-1. Jon was hitting consistently good ground-strokes, Adam making some excellent volleys at the net, with Dave scrambling to retrieve balls from behind the baseline. Andy as usual was ‘Mr Consistent’.

Dave held serve in the penultimate game of the match, but the second set went the way of the first, 6-1 to Andy & Jon.

The International Tennis Federation (ITF) defines that tennis balls must have masses in the range 56.0–59.4 grams; Yellow balls are used in competitions. By the end of the match, the balls were black and who knows how heavy, such is the nature of the climate in the UK.