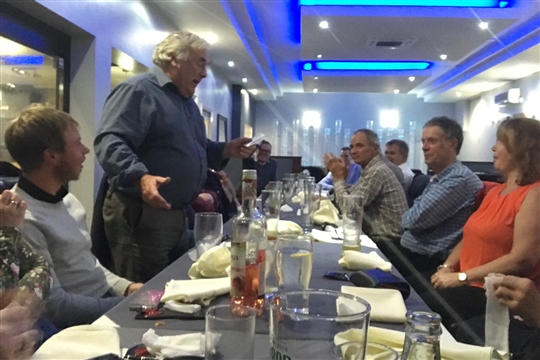 Twenty one tennis players who took part in this year's league fixtures attended the end of season meal.

As is traditional, the group met in the Bridge and went on to the Manzil Curry House for a very plentiful buffet meal. Keeping to the theme of tradition, Bruce Wilkinson arranged for a 'small sample' of Bridge Bitter to be transported to the restaurant!

Brewers' captain Bill Higson thanked everyone for attending and for representing the club over the summer in the many teams we put out. He reported that it was a mixed season in terms of league standings, however, everyone tried their best and reperesented the club very creditably.

Whilst the Seniors finished second in their division, both the Youth team and the men's first team finished mid-table. The Brewers unfortunately finished bottom of their division, as did the mixed team. The ladies' A team ended the season mid-table and the ladies' B team were sixth.

However, as we have had an influx of several new talented players of late so we are hopeful of a much- improved season next year!