Our adults Open Finals day for 2019 took place on the 29th June which is a change from previous years.  It normally takes place in mid-September, but it was decided to change the date to make it more of a Summer tournament and hopefully we would have more chance of better weather.

Well, we got better weather but it was a little bit hotter than any of us expected! It was the hottest Saturday in June probably ever, with scorching heat up to 33 degrees and we almost had to play with heat rules!

Despite the heat, all our finalists battled bravely and did their best in their respective matches. A special mention goes to Jill Lederer who was in 3 finals, Ladies Singles, Ladies Doubles & Mixed Doubles.

The day started with a new event for our finals day of a plate competition for the Men’s Singles and Doubles. Both matches were hard fought and the winners were Calum Mckenzie defeating Paul Stanton in the Singles and Neil Woodcock partnering Andrew Rudkin to beat Mark Tyrell & Ed Smith in the Doubles.

After that came the Men’s & Ladies Singles events.  Sadly, the Men’s Singles final did not take place this year but Barnaby Maddock was the winner by default.  The Ladies Singles was won by Jill Lederer for the eighth time beating Deborah Miller.

The Ladies Doubles was another good match and almost a repeat of last year’s final with the same players apart from one. Rachel Speight partnered Lesley Walton this year to defeat Jill Lederer & Laura Williams who are previous champions and last won the event in 2016.

The Mixed Doubles finished off the day with a great match that featured a pair of finalists from 2018, Peter Agnew & Jill Lederer, who have won the mixed event together twice before. They were defeated by newer members Nadine Talbot & Michael Garlick who know each other from their days as juniors at Camberley.  Nadine has previously won the mixed twice with her father Nigel March in the early 1990’s.

Thanks to all those who helped on the day. It is really appreciated.

Last but not least, the day would not have been complete without the food & BBQ organised by our fabulous social secretary Liz Mithani.

Next event is the Veterans tournament on the 27th July and the Junior Open in September.

For photos from the day click here: FINALS PHOTOS DAY

Thanks to Liz Mithani and John Glavez for taking these for us. 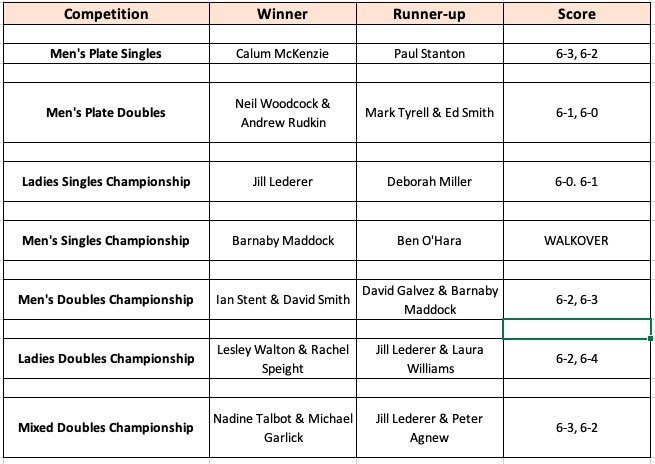