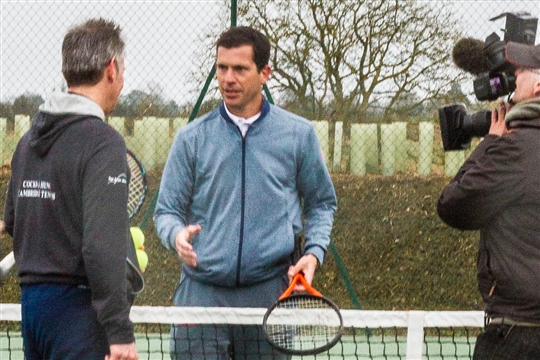 28 February 2017:  Simon Elliott, (C&H's Chairman) staging a rematch against Tim Henman (former British No.1 and he of Wimbledon Henman Hill fame) at the Grand Opening of the Club's new site on the Grantchester Road.   Simon was 19 and Tim 7 when they previously met on the tennis court.  At that time, Simon was at the height of his game and beat the young prodigy hands down.  In the intervening years, however, Tim became a top world ranked player (No 4) and it was therefore a very brave Simon who agreed to stage a return match.  Despite the rain and the cold, scores of Club members, local dignitaries and the local media turned out to watch the exciting rematch, which was followed by tea and cakes in the clubhouse!