We've seen a tentative return to something approaching normality at HLTC in recent weeks, with small-scale social events returning, albeit in a restricted manner in accordance with guidelines. One such event was Wednesday's Midsummer Fun Tournament.

Players were grouped into mixed A and B categories with a lady and a man winning each group. To add a random element, competitors were asked before play started to pick a round on which to play their joker,  earning doubles points on whatever they scored.  The catch was they didn't know who they would be playing with or against in any of the rounds.

The weather looked pretty ropey all day so we were amazed and relieved when the clouds blew over, leaving us with an overcast but dry evening. The tournament ran smoothly until Fiona was let loose on the maths at the end (there's a reason she's a writer/editor not a mathemetician!) and got the winners wrong. It was the 2017 Moonlight Oscar all over again!

The actual winners were as follows: In group A, Caroline B was out and out top lady with 24 points and David K and Simon I were tied as top men with 22 points. In group B Tom H came out on top with 25 points (although the prize was presented to Rod J with 19 points) and Pauline W was top lady with 18 points. Apologies to Tom and Simon for missing their winning scores initially.

Once the tennis was over, we all enjoyed a fish and chip supper and drinks generously provided by William and Pat H, who wanted to thank club members for their kindness and support last year. It was a lovely gesture and was splendid to see them both on excellent form. 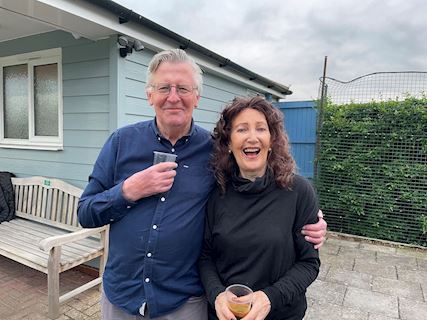 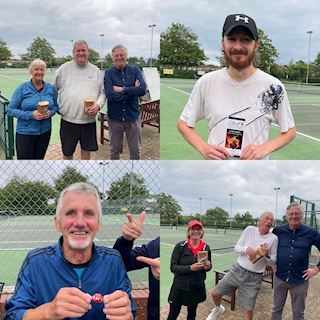