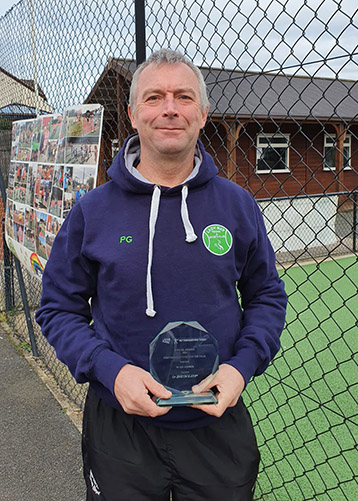 We are delighted that Pete Godber has been named as Nottinghamshire's Performance Coach of the Year!

At the virtual Awards Night on Saturday 6th March, Pete was presented with his award by Freya Christie, winner of 13 ITF doubles titles.

Pete’s nomination is an indication of his unparalleled career in performance coaching. He has an unerring eye for talent - often from complete beginners - and has taken these individuals to a very high level.   The list of individuals he has taken to county level and beyond is endless.   Pete cares passionately about tennis and shares this with those he coaches, going the extra mile to ensure they reach the peak of their ability.

As Head Coach at Lady Bay Tennis Club, he has had a huge impact there, taking both ladies’ and men’s National League teams to national finals and feeding countless youngsters into league teams.

Due to Covid travel restrictions, Pete has run several internal tournaments run to take the place of travelling to tournaments.Members of the men’s national team squad, assembled and captained by Pete, have continued to train at the club. Some of these players (before returning to USA for college) have spent time coaching and playing with the juniors, giving them an insight into what is possible.

The nomination for Pete comes not only for this year but from previous years of having players compete at National tournaments. It is credit to him as a coach that he continues to keep touch with a lot of the players he's coached over the years with numerous continuing in tennis such as Ben Dunbar who is currently the Head Coach of Lobo Tennis for The University of New Mexico and Rob Chambers who coaches at an academy in Hong Kong.