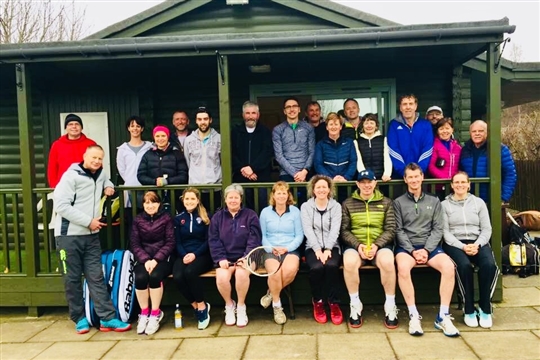 Melrose Waverley Tennis Club held their inaugural Melrose Mixed Open tournament on Saturday 7th April. Twenty four players from eight clubs across the Borders and beyond, including North Berwick, Berwick-upon-Tweed, Kelso, Duns, Lennel, Peebles, St Boswells and Melrose took part, competing in timed group stages and then progressing through to the final stages of the main competition or through to the plate competition.

The overall winners of the event were Lisa Campbell (Peebles TC) and Craig Thomas (Melrose TC) - they defeated Alison Moore and Glen Gordon (both of Melrose TC) in the final.

The trophies, crafted by Peter Holmes of Border Art Glass in Hawick, and sponsored by Scottish Borders Council, were presented by the Convenor of the Council, Cllr David Parker.

The club would like to thank everyone who supported this year's event and look forward to seeing everyone back again next year!