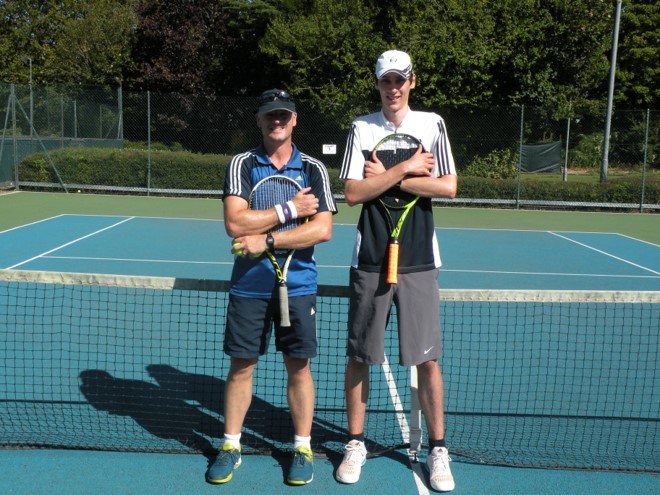 We are very proud to announce that Jamie Thomas has again won the singles championship for this year.  See below the report on all the matches this year, written by Richard Mole:-

The annual tennis league individual finals took place at Beechdown on 15th September. The event was well attended and the weather could not have been better.

In the mens singles defending champion Jamie Thomas (Old Basing) took on Paul Ayres (Beechdown). In a closely fought first set Jamie’s serving was the dominant force and despite some attacking play from Paul, particularly at the net, it was not enough to prevent Jamie from taking the first set 6-2. Again in the second set there were some good rallies but Paul was unable to break serve and Jamie’s all round power was enough to see him take the set 6-0 and retain his title.

The ladies singles saw two new players making the final with teammates Gill Stoney and Clementina Tuck, both from Riseley, facing each other. Both sets were very closely fought as they both knew each others game well. Holding serve was a problem for both players but Gill’s power and positional play was the deciding factor and she ran out the winner 6-2. 6-3 to take her first title.

The mens doubles also saw new players in the final with Adam Fitzgerald and Simon Woodhall (Hampshire Court) taking on Dan Ghiurluc and Ezuego Aguta (Beechdown). Adam and Simon got off to a fast start with them taking the first set 6-1. In the second set things were a lot closer and with both pairs playing some excellent tennis with the vital break of serve going to Dan and Ezuego enabling them to draw level taking the set 6-4. In the deciding set an early break of serve gave Dan and Ezuego the advantage and they managed to hold on to take the final set 6-2.

The ladies doubles saw the winners for the last 5 years Andrea Butcher and Clare Schofield (Beechdown) take on Gill Stoney and Becca Howard (Riseley). There was some excellent tennis played by all 4 players and all of the sets could have gone either way. Despite Clare carrying an injury, she and Andrea managed to take the first set 6-4. The second set saw Gill and Becca get the decisive break of serve to take it 7-5. The deciding set had a number of service breaks for both teams but eventually the defending champions prevailed 7-5 to take their sixth title in a row.

The concluding event of the day saw Gill Stoney take the court for her third final this time with her partner Peter Blyth (Riseley) and taking on defending champions Ben Jubin and Steph Catlin (Totally Tennis) in the mixed doubles. The all round play and power of the champions was too much for their opponents and they took the first set 6-0. The second set was a little better for Gill and Peter but the play of Ben and Steph again proved too strong and they took the set 6-2 to retain their title for the third year in a row.

Thanks to Beechdown for the use of their facilities once again.