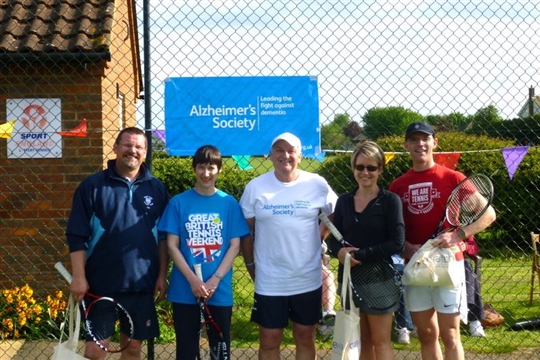 Sunday was our opening tournament of the summer season, celebrating the reopening of our courts after the relaying of courts 2 and 3, and the repainting of court 1.  The courts looks smart in the sunshine.

We had 32 players in the tournament, and the standard was high.  Friendly competition and rivalry abound.  Everyone got to play four matches with different partners and different opponents.  And the best male and female players in the two halfs of the draw contested the final, played in front of a large crowd.  The finalists were Phil Bennett and Eleanor Carter against Emma Maitland and Paul Norbury.  It was a close match, and Phil and Eleanor were a point away from taking it to a tie-break.  But Paul and Emma managed to win the point to secure a 4-2 victory.

A special mention and big thank you to Simon Barter for organising the tournament, and helping the fund raising for the Alzheimer's Society.  The total raised was over £1,000, with sponsorship from J Garrard and Allen solicitors, and match funding from Carewatch.  And Emma Barter provided some delightful and tasty treats to help us along the way.