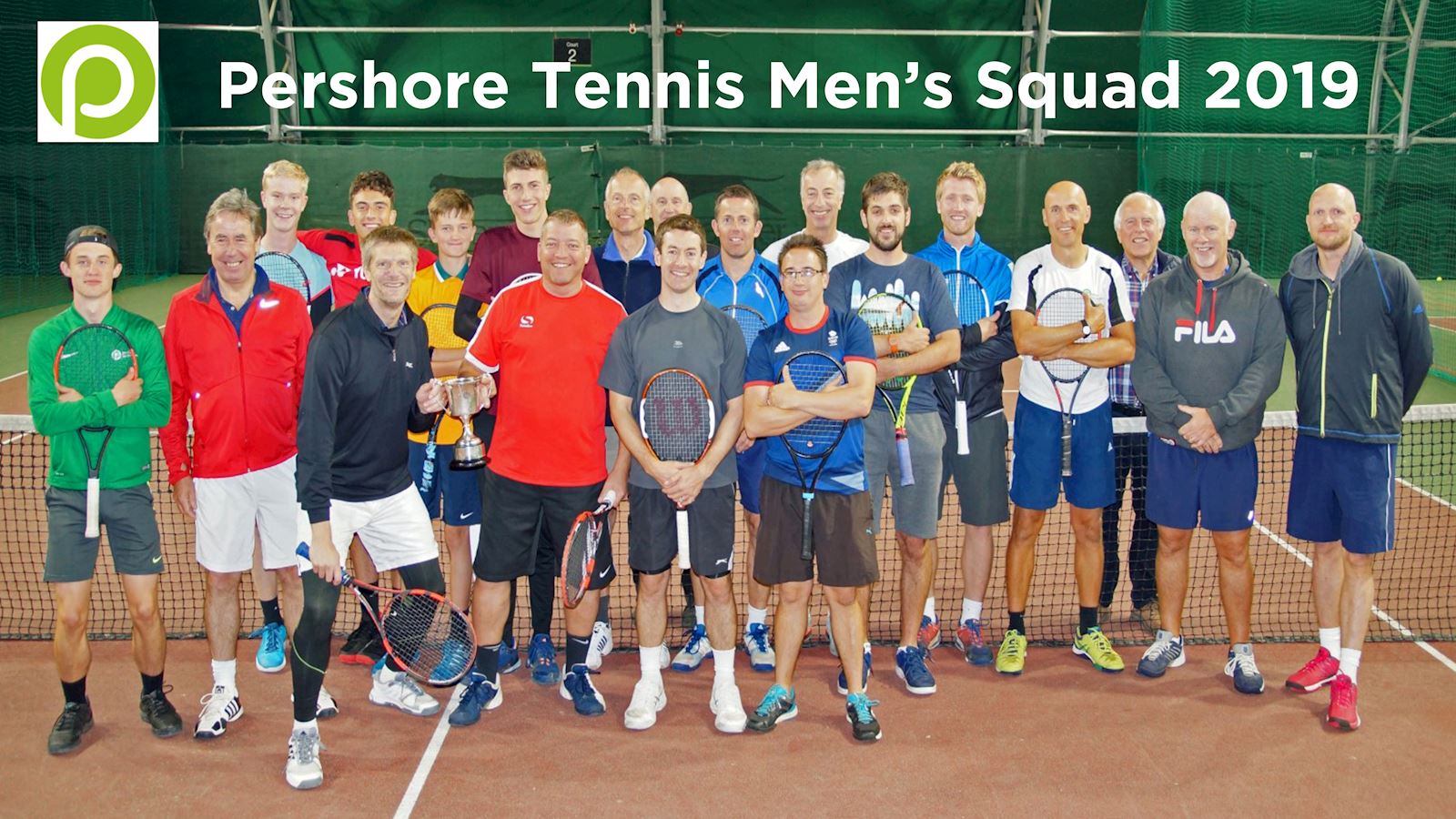 As the final men’s team matches are concluded, Pershore Tennis Centre can look back at 2019 as its most amazing year on record.

For the first time the club ran 3 men’s teams in the winter and the summer South Warwickshire (SWAS) leagues. In the winter season the A team, captained by Jon Guppy, finished as runners-up in Division 1 to Ardencote A, Jon leading the way with 15 wins from 18 matches played, but the B team went one better in edging Wythall out of first spot in Division 4.

The newly-formed C team demolished their opposite numbers, winning 13 of their 14 matches and drawing the other match to top Division 7. In total the 3 teams lost only 3 of the 42 matches played.

In the winter Pershore’s 2 men’s teams in the Herefordshire & Worcestershire leagues had successful seasons, with the A team runners-up in division 3 (East) and the B team winning division 6 (East).

Having set the bar so high it was going to be a tall order for the teams to match the winter league performances, but the good form and the confidence carried through to the SWAS summer league matches. A final match 2-2 draw with eventual Premier league winners, Alcester A, meant that the A team had to again settle for the runners-up slot, while a 4-0 victory in their final match saw the B team leap-frog Ardencote B and Inkberrow A to snatch the closely-fought Division 2 title. B team captain, Dave Morris, worked very hard to blend several new players into an effective and attack-minded team.

The C team powered their way through Division 5, winning all 14 matches. One interesting statistic was that no fewer than 13 players turned out for the C team, with only one player managing to play over half the 14 matches. This shows the strength in depth of the C team, which was ably captained by Neil Thompson.

The H&W summer leagues have yet to be concluded, but the A team is securely placed in division 2 and the B team are almost certain of promotion from division 6 (East).

One final achievement for the men and women has been finishing the summer H&W mixed league division 1 as champions, beating the first teams of Manor Park, Worcester, Droitwich, Bromsgrove and other teams en route to the title. Team captain Simon Corbishley was particularly proud of the fact that no fewer than 13 players represented the team, again underlining the flexibility and strength-in-depth of the players.

Over the 2 seasons the Pershore men’s teams won 60 of the 84 SWAS matches (71%). Once again only 3 of the 42 matches played by the 3 men’s SWAS summer league teams were lost. The improvement over previous seasons is in part due to the success of the Thursday night team coaching sessions led by head coach, Steve Bauer, and the growing club membership, which stands at just over 400.

Another feature has been the willingness of Pershore’s men’s captain, Dave Morris, to play junior members in the A and B teams. Anthony Fordham (Prince Henry’s, Evesham) took over the captaincy of the senior H&W A team, while Dan Walker (Prince Henry’s) enjoyed a much-improved year and has become a regular player in the top teams, as has Matt Sime (another Prince Henry’s protegé).

Much of the credit for the development of the younger players must go to Mike Langston, one of the club’s coaches and a regular member of the H&W county men’s squad. Mike runs the county U-18 squad, which trains at Pershore on Monday evenings, and also set up the Pershore Futures squad on Friday evening, which attracts junior players from all over the county.

This has, in turn, led to several top county juniors from as far afield as Halesowen (Sean Randle) and Stourbridge (Max Hingley) becoming members at Pershore where they enjoy the excellent indoor facilities and represent the senior teams.

Here at Pershore we are great believers in developing junior players, pairing them with experienced older players and giving them responsibility. We also like to mix up the pairings, so they become comfortable with different partners.

With 3 indoor and 5 outdoor courts Pershore Tennis Centre has exceptional facilities for a town of its size. The indoor centre is one of the few in the country equipped with LED lighting and 2 of the outdoor courts were resurfaced last year with Tiger Turf. In the next few weeks floodlights will be installed on court 5 and a new playing surface completed.

The last word is from head coach, Steve Bauer, who said:

I’m proud to be part of the men’s tennis set-up at Pershore, working closely with team captains. There’s a great spirit and great commitment from all and our Thursday night team training sessions have made that crucial difference between just doing well and now competing on equal terms with all the top clubs in the county and beyond.