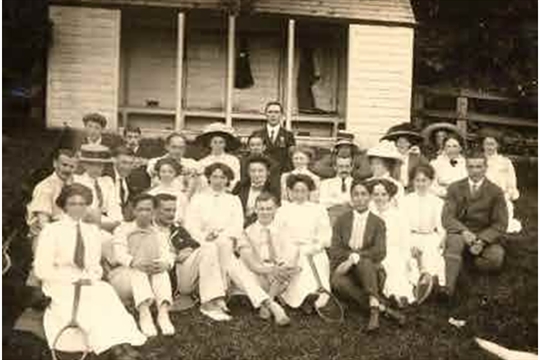 Rothbury Lawn Tennis club was founded in 1889. The following are press extracts from around that time.

LAWN TENNIS: Visitors to Rothbury will be glad to learn that the members of Rothbury Lawn Tennis Club have been most energetic during the past winter and have succeeded in securing a piece of ground in a field north of the village belonging to Mr R. Farrage, Bank Manager, where they have constructed three excellent courts. The site on the slope of the hill facing the south, near the village is a most picturesque spot, commanding a fine view of the valley of the Coquet and Simonside Hills.

Any information as to the terms of the club, etc., can be had on applying to Mr J.W. Schofield, Hon. Secretary. (Saturday, 8th June, 1889)

WHITSUNTIDE: The Lawn Tennis Club, by the invitation of the Rector, Rev. A.O. Medd, opened their season by a few games on the court of Whitton Tower, and spent a pleasant afternoon there. (Saturday, 15th June, 1889)

ROTHBURY - LAWN TENNIS: This favourite and enjoyable pastime has at length commenced once more and the formal opening of the new ground took place on Friday last, in the presence of a very large company who had assembled to anaugurate the auspicious event. As the day was beautifully fine, the general effect of the light summer costumes was very pretty and enhanced the natural beauty of the scenery. Tea was laid ready for 4.30 p.m. and was pleasantly discussed while before and after the three courts were well patronised. In order to give some rest to the play, a hastily arranged tournament was played off and was generally well enjoyed, and some of the sets were fairly contested. It is expected that should weather proved fine, the tennis courts will have plenty of work to stand during the time yet available this season. (Saturday, 13th July, 1889)

(Reprinted from a newspaper cutting loaned by Michael Davy, Warton)

LAWN TENNIS - HANDICAP AT ROTHBURY: Owing to the kindness of Miss M. Dawson of Ripon and Rothbury, and the enthusiasm of the members of the above club, a very enjoyable afternoon was spent on the lawn tennis ground at Rothbury. The weather was at first dull and sultry, finally ending in a thunderstorm, which stopped play just before the final rounds of two of the handicaps. Miss Dawson not only provided a sumptuous tea, but gave the following very handsome prizes for competition:- Ladies' singles, gold broach; Gentleman's singles, gold sleeve links; Mixed doubles, 1st prize (Lady) handsome writing case and desk combined; 2nd prize (Lady) bottle of Eau de Cologne; 1st prize (Gentleman), silver mounted clothes brush; 2nd prize (Gentleman), perpetual calendar and note tablet, Dr. Barrow, the secretary, carried out the arrangements of the tournament in a satisfactory manner. (August 1892)