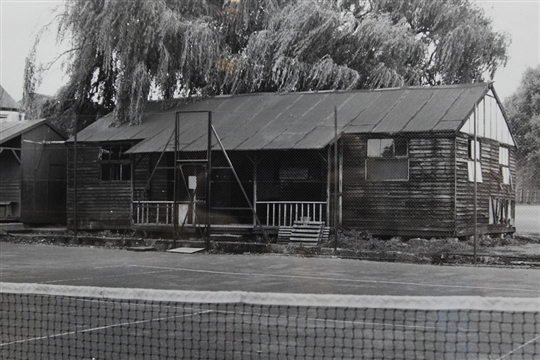 Although the Cricket Club was founded in 1875, no record appears to have been kept of the actual, date when the Tennis Club came into being. It is generally thought to have come into existence in the early 1920s, but after a recent investigation the first recorded reference to the Club was in 1929.

Little is known about the early days of the pre-second World War period except that play took place on courts that were all grass. The matches were mostly friendlies and as very few women went out to work in those days, all the Ladies’. Matches were played in the afternoons.

After the war it took a few years to rebuild the membership. The courts which had become derelict were replaced with five shale courts which, although a non-aesthetic grey colour, proved to be more practical than the original grass.

In 1951 there was a big boost to membership. When the Dollis Hill Tennis Club closed down, many players from that club joined and membership virtually doubled during that Season. This laid the foundation of the Club as we know it today.

During the next twenty years from 1951 to 1970 the Club became very much more competitive and entered teams in local leagues with great success. The Mens’ team won the North West Middlesex League for four consecutive years in 1963, 4, 5 and 6. This period was also notable because for the only time in the Club’s history, the Mens’ team played in the top division of the Middlesex Cup Competition for three successive years in 1963, 4 and 5. In spite of strenuous efforts by subsequent teams, this success has never been repeated.

A Mens’ Second Team for reserve players was formed in 1967 and many players progressed through this team to the First Team in subsequent years. Many members began to enter individual tournaments outside the Club. One of these was the Edgware and District Tournament which was an association of ten clubs from the surrounding area. The highlight of this period was 25th July, 1964 when the finals of this tournament were held at South Hampstead and over 200 spectators watched some of the best tennis ever played at the Club. South Hampstead players won both the Mens’ Singles and the Mens’ Doubles and the day was rounded off with a memorable dance and social evening at the Hendon Hall Hotel.

After 20 years of continuous play, the courts had deteriorated badly and in 1966 four of them were re-laid with a red en-tout-cas surface. Finances did not allow for a fifth court so this remained derelict for a further five years, at which time a new all-weather court was added.

In the early 1970s tennis lost some of its popularity and there was a dramatic drop in membership. Due to the efforts of a nucleus of stalwart members, however, the Club survived and towards the end of the 1970s membership again began to increase. Many younger people joined a Junior Section, which reaped the benefit of regular organised coaching sessions. For a few seasons an Intermediate Section was formed to accommodate senior members with limited playing ability.

As the 1970s gave way to the 1980s, a new spirit of enthusiasm could be felt throughout the Club. Many social activities were introduced that have now become regular events. The improved finances resulting from all these activities enabled the Club to invest in two new all-weather courts and at the same time to renew all the surrounding wire netting. These new facilities were completed in the Summer of 1984.

During the early 1980s more members became interested in match play and to meet this demand a second Ladies’ team and a third Mens’ team were entered in the Middlesex League and have recorded some very creditable performances. Later on, a Ladies’ Third Team was also entered.