Asa Sumner-Keens and Saul Hindmarch swept the board in this year's Suffolk County Closed event at Ipswich Sports Club.

Well done to everyone who took part and to the winners in every age category. 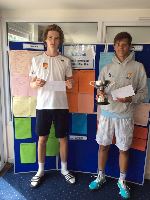