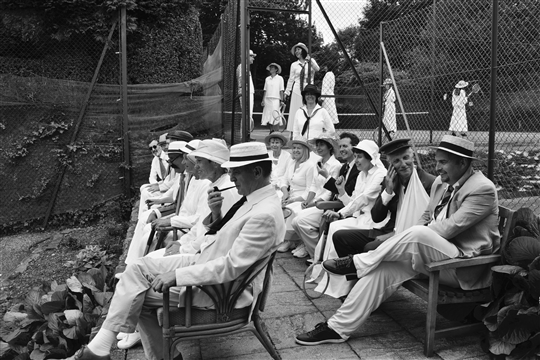 Members dressed up, played tennis with wooden racquets and then recreated a photo which hangs in the clubhouse.

(this photograph can be seen in the previous news article)

It was taken during WW1 when the club entertained wounded soldiers on Saturday afternoons.

As early as October 1914 there was criticism in both the local and national press that people were relaxing and enjoying themselves here while soldiers at The Front were enduring terrible things.

So the Brentwood Committee came up with the idea of opening the club to wounded soldiers to be entertained and, if fit enough, play a game of tennis.

Transport was sent to the Base Hospital at Collegiate Crescent to collect and return the soldiers.

It became so popular that other local clubs followed Brentwood's example.

Club President, Andy Fee, said "A great day was had by all. Our thanks go to Susan Gudjonsson from the Nether Edge History Group who did some research and put up a display for us in the clubhouse".