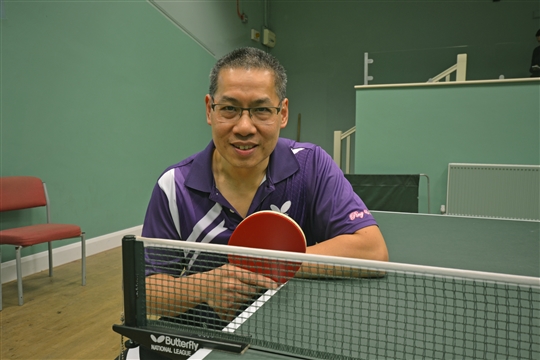 George has been Head Table Tennis Coach at Harrogate Racquets Club since 2011 and has built up the Junior section from scratch to providing multiple weekly Junior coaching sessions. George also runs adult, school and community coaching sessions. Some of his players have gone on to play at county and national level.

George has played competitive table tennis since 1980, first at Imperial College, London and then in Manchester and Harrogate leagues at the highest level.  He has a wealth of experience of different playing styles and bat combinations.

He is currently a UKCC level 2 table tennis coach and coaches both penholders and traditional shakehand styles.

His enthusiasm has inspired other club members to qualify as coaches.  The club now has another 3 level 1 coaches which strengthens the coaching provision and gives Racquets a great base to further develop the coaching programmes.

Table Tennis is my passion! I have played competitive table tennis from 9 years of age.

John is a Full Time Table Tennis Coach, qualified to UKCC level 1. He can coach players of all standards from complete table tennis beginners to advanced players. He is very experienced with all styles of table tennis play having being personally successful playing as an attacker and then later adopting a ‘modern day’ defensive style.

John has represented Leeds and Yorkshire in table tennis tournaments at every age level receiving training from some of the regions best table tennis coaches. He plays competitive table tennis at an advanced level, playing with teams in the top divisions in Leeds & Bradford Table Tennis Leagues including Leeds Veteran’s Table Tennis Team.

Linda has joined our team this year and with her she brings some fantastic experience. Linda started playing at Butlin's in 1962 and has played every since. She has represented Yorkshire for many years starting as a junior. Latterly she was the England Veteran number 1 player in both over 50's and 60's age group. She is an England Veteran team International Gold medalist and European bronze medalist.

Linda is looking forward to sharing her enthusiasm and love of table tennis with our club. She will be working with George to build and develop our junior and adult sections.

Not only is Sarah chair of the table tennis section but Sarah has spent most of her life....playing table tennis too ;). She is very proud of her title of British Universities Sports Federation Champion and has represented her county of Lancashire.

She is a level 1 UKCC qualified coach and helps out with many of our sessions.