The Safeguarding Policy has a number of appendices that can be read here:

Safeguarding: protecting children from abuse and neglect, preventing the impairment of children’s health or development, ensuring that children are growing up in circumstances consistent with the provision of safe and effective care, and taking action to enable all children to have the best life chances. Enabling adults at risk to achieve the outcomes that matter to them in their life; protecting their right to live in safety, free from abuse and neglect. Empowering and supporting them to make choices, stay safe and raise any concerns. Beginning with the assumption that an individual is best-placed to make decisions about their own wellbeing, taking proportional action on their behalf only if someone lacks the capacity to make a decision, they are exposed to a life-threatening risk, someone else may be at risk of harm, or a criminal offence has been committed or is likely to be committed.

Physical abuse: A form of abuse which may involve hitting, shaking, throwing, poisoning, burning or scalding, drowning, suffocating or otherwise causing physical harm to a child or adult at risk. Physical harm may also be caused when a parent or carer fabricates the symptoms of, or deliberately induces illness

Sexual abuse: Involves forcing or enticing a child or young person to take part in abuse sexual activities, not necessarily involving a high level of violence, whether or not the child is aware of what is happening. The activities may involve physical contact, including assault by penetration (for example, rape or oral sex) or non-penetrative acts such as masturbation, kissing, rubbing and touching outside of clothing. They may also include non-contact activities, such as involving children in looking at, or in the production of, sexual images, watching sexual activities, encouraging children to behave in sexually inappropriate ways, or grooming a child in preparation for abuse (including via the internet). Sexual abuse is not solely perpetrated by adult males. Women can also commit acts of sexual abuse, as can other children

Emotional abuse: The persistent emotional maltreatment of a child or adult at risk such as to cause severe and persistent adverse effects on their emotional development. It may involve conveying to a child/ adult at risk that they are worthless or unloved, inadequate, or valued only insofar as they meet the needs of another person; not giving them opportunities to express their views; deliberately silencing them or ‘making fun’ of what they say or how they communicate. It may feature age or developmentally inappropriate expectations being imposed, including interactions that are beyond a child or adult at risk’s developmental capability, as well as overprotection and limitation of exploration and learning, or preventing them participating in normal social interaction. It may involve seeing or hearing the ill-treatment of another. It may involve serious bullying (including cyber bullying), causing a child or adult at risk to feel frightened or in danger, or the exploitation or corruption of children. Some level of emotional abuse is involved in all types of maltreatment of a child, though it may occur alone.

Neglect: The persistent failure to meet a child/ adult at risk’s basic physical and/or psychological needs, likely to result in the serious impairment of their health or development. It may involve a parent or carer failing to:

It may also include neglect of, or unresponsiveness to, a child’s or adult at risk’s basic emotional needs. Neglect may occur during pregnancy as a result of maternal substance abuse.

Additional examples of abuse and neglect of adults at risk

Discriminatory abuse: treating someone in a less favourable way and causing them harm, because of their age, gender, sexuality, gender identity, disability, socio-economic status, ethnic origin, religion and any other visible or non-visible difference.

Domestic abuse: includes physical, sexual, psychological or financial abuse by someone who is, or has been a partner or family member. Includes forced marriage, female genital mutilation and honour-based violence (an act of violence based on the belief that the person has brought shame on their family or culture). Domestic abuse does not necessarily involve physical contact or violence.

Organisational abuse: where the needs of an individual are not met by an organisation due to a culture of poor practice or abusive behaviour within the organisation.

Self-neglect: behaviour which threatens an adult’s personal health or safety (but not that of others). Includes an adult’s decision to not provide themselves with adequate food, clothing, shelter, personal hygiene, or medication (when indicated), or take appropriate safety precautions

Modern slavery: encompasses slavery, human trafficking, criminal and sexual exploitation, forced labour and domestic servitude. Traffickers and slave masters use whatever means they have at their disposal to coerce, deceive and force individuals into a life of abuse, servitude and inhumane treatment.

Appendix B: What to do if a disclosure from a child or adult at risk is made to you:

Appendix C: Reporting a Safeguarding Concern outside the Tennis Environment

What to do if you are worried that a child is being abused outside the tennis environment (e.g. at home, school or in the community) but the concern is identified through the child’s involvement in tennis. 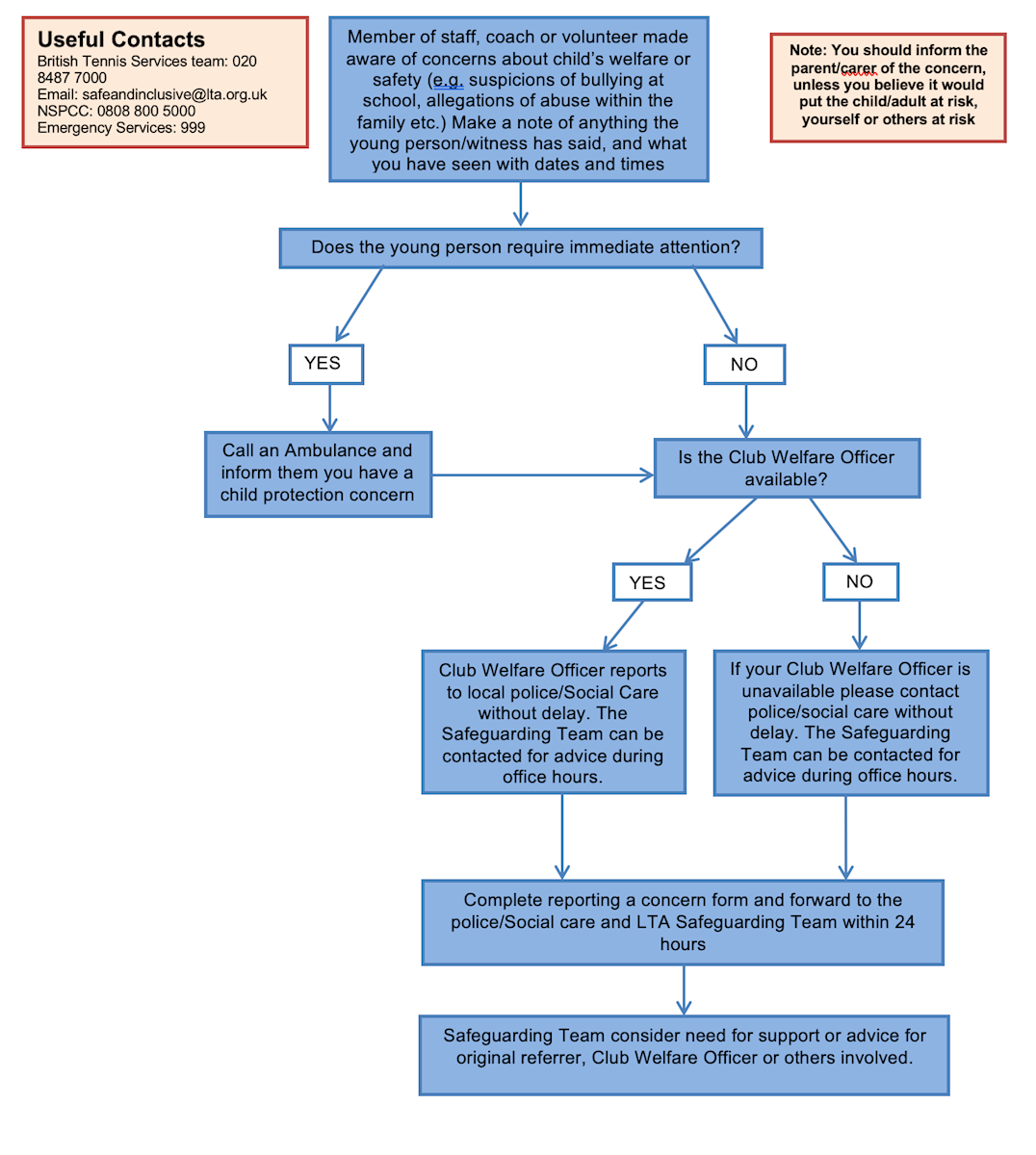