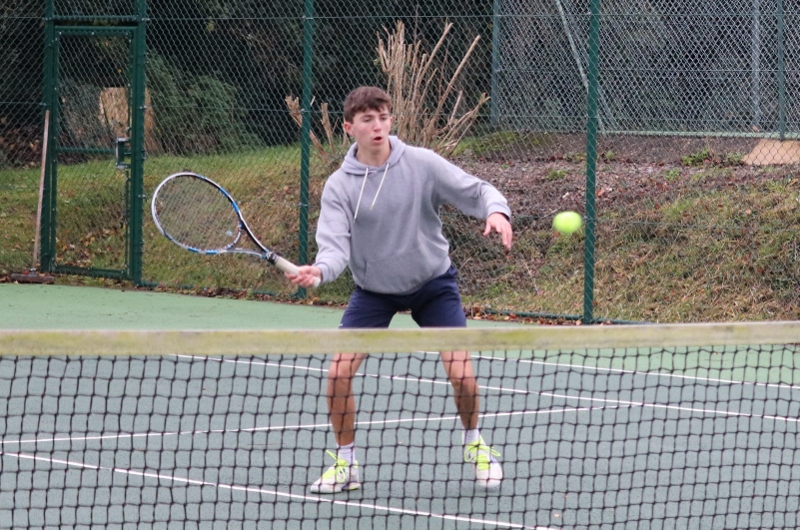 Matt first started playing tennis aged 8 after the SLTC coaches visited Swanmore Primary School to offer the children some taster sessions.  He enjoyed these and quickly became a regular participant in the Saturday morning sessions held for the youngest juniors at the club, led by Di Hill.  As he progressed, he joined the next Saturday session for the more experienced juniors and then later the teenage squad run by Bash, and continues to participate in as many club sessions as he can. Throughout his time at SLTC he has enjoyed the support and encouragement of all our coaches particularly Mike, Bash and more recently Jake, as well as many of the adult members.

Matt soon started playing competitively for the club junior tennis team participating in the Hampshire & IOW Team Tennis competitions, and was very pleased to be part of the teams who won the U12 (2015) and U16 (2018 & 2019) divisions. He also got through to the Road to Wimbledon County Finals held at Canoe Lake in 2015, 2016 and 2017. As with all players, Matt started with a tennis rating of 10.2 and has now achieved a rating of 5.2 through a mixture of match plays against same rated players and beating same or higher rated players in external tournaments.

For the last 2 years Matt has entered external tournaments whenever he can (around 30 in 2019), mainly playing singles, but occasionally doubles with Matt Morris.  As he is now 17, he is facing the challenges of stiff competition in the Under 18s and open men’s competitions.  He is currently ranked number 27 in the under 18s  (57 in the open) in Hampshire.

Matt is a very active member of the SLTC and plays in both men’s and mixed teams whenever he can, and also in the club championships, where he has been very successful in his junior years.  He is also still to be found at the club most Saturday and Sunday mornings helping out with junior group coaching sessions, which he particularly enjoys, and he hopes to take the LTA levels 1 and 2 coaching qualifications soon.

Matt’s love of tennis also follows him to college where he is a member of the Peter Symonds Tennis Squad, and has also selected tennis as his “practical” sport for his A ‘Level in PE which entails recording and critiquing his play.
Matt has now been recognised by Hampshire tennis as he has been invited to join the monthly men’s County training sessions, about which he is rightly proud.

Matt’s passion for this sport costs his mum a fortune in new strings and tennis shoes!