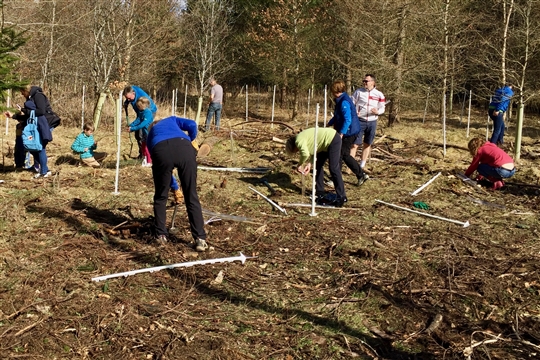 Members of Aboyne Tennis Club replaced their rackets with spades this spring as they planted trees around the new courts.

The saplings were provided free by Woodland Trust Scotland as part of a mass countrywide tree planting with support from Sainsbury’s, IKEA FAMILY, players of People’s Postcode Lottery and Yorkshire Tea.

Club members planted more than a 100 saplings including rowan, birch, hawthorn, holly, crab apple and hazel trees. Each tree was sponsored as part of the club’s ongoing fundraising, which raised more than £500 from the day.

The trees were planted to replace the large fir trees which were removed as part of the club’s major refurbishment project. Small trees were chosen to prevent any damage to the new courts in future.

Organiser of the event, Mo Speak said: “We had a wonderful time planting our lovely trees and it is fantastic to think they will be around to improve the community for decades to come. Many thanks to everyone who sponsored a sapling and to Woodland Trust Scotland for the free trees.”