Jack Graham in the Hastings Independent 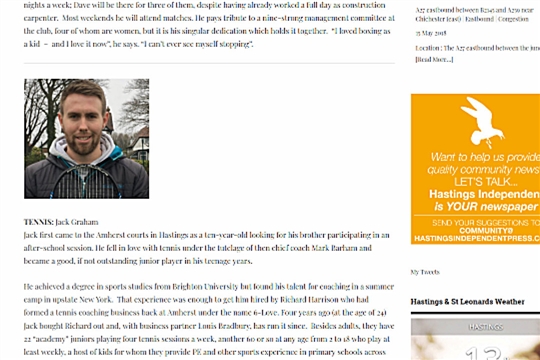 "TENNIS: Jack Graham
Jack first came to the Amherst courts in Hastings as a ten-year-old looking for his brother participating in an after-school session. He fell in love with tennis under the tutelage of then chief coach Mark Barham and became a good, if not outstanding junior player in his teenage years.

He achieved a degree in sports studies from Brighton University but found his talent for coaching in a summer camp in upstate New York.  That experience was enough to get him hired by Richard Harrison who had formed a tennis coaching business back at Amherst under the name 6-Love. Four years ago (at the age of 24) Jack bought Richard out and, with business partner Louis Bradbury, has run it since.  Besides adults, they have 22 “academy” juniors playing four tennis sessions a week, another 60 or so at any age from 2 to 18 who play at least weekly, a host of kids for whom they provide PE and other sports experience in primary schools across town during term-time, then a whole lot more again for holiday camps held at Amherst not only over the summer, but at Christmas and Easter too. An inactive younger generation? Not when Jack’s around."