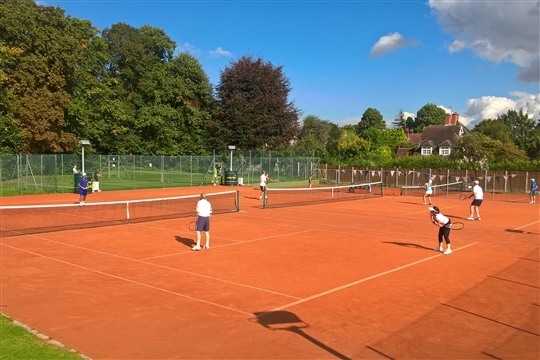 At BBLTC we have always had a policy of investing in the best playing surfaces available & maintaining them to the highest possible standard that our funds allow. We realise that there have been problems with two of the clay courts, which has particularly impacted on the evening coaching sessions. In what has been a very wet winter, here is a summary of the measures we have already taken & those which are planned.

During the summer and drier months these courts have been in very good condition and have played very well. But in the autumn and winter months, as we have had a lot of rain, the drainage has been poor, and there has been black silt forced to the surface. Apart from making the surface slippy & dangerous to play on, this silt is also very unsightly.

Although this type of artificial clay court has been around for at least 7 years, understanding regarding their maintenance is still in its infancy. Other clubs with the same courts have expeienced similar issues. After consultation with other clubs and court providers; we have determined that the problems are a consequence of poor drainage which in turn is caused by a compaction of the sand/silica.

We have started a thorough deep brushing programme which has been successful in most areas of the courts apart from the base & service lines. Tiger Turf, the court providers, will provide further remedial work on these areas in the next few weeks. An ongoing weekly maintenance programme should then keep on top of the compaction issue to minimise future compaction/drainage issues.

Members are reminded to use all courts of the club and ensure that it is vital to brush the courts after use to help with this maintenance programme.

The floodlights are key to ongoing success of coaching and playing on dark evenings. Although The Late Play company has gone into liquidation; with the expert assistance of club member Tony Kumeta, we have been able to repair all of the faults that have arisen. We are soon to engage a specialist service company who will undertake a full maintenance of the system.

The clay courts require watering in periods of dry weather to keep them in optimum playing condition. We have upgraded our existing sprinkler system by replacing the pump & all of the sprinkler heads. The system is currently drained for the winter & will be re-commissioned in the spring.