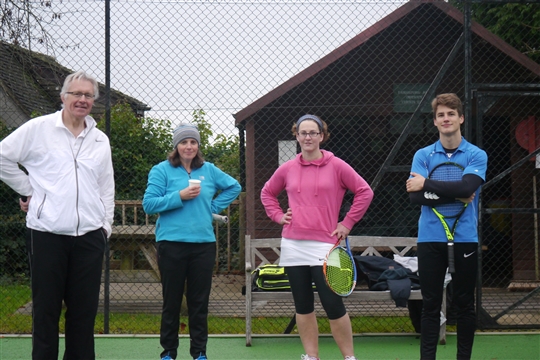 Ron Marshall held his first one-day tournament for club members this Saturday.  It was a fun examination of player's tennis skills, as well as their ability to cope with the unexpected.  We played 9 15-minute rounds of doubles, switching partners every time.  The racket spin winners were invited to pick a 'Trick or Treat' card from Ron's deck - so you never knew whether you would be winning any game where you won two points in a row, or if you hit a clean winner - or trying to serve on one leg!  Apart from the enjoyable randomness of these twists, it did make you focus on particular elements of your game. You're much more careful serving when you only have one serve, and you think much more about where you're standing, when you can only hit forehands!

Finn Ross was the winner among the men, and Ann Cook took the laurels among the women.  Each was rewarded with a lovely (drinkable) treat, and everyone got something from Ron's lucky dip of tennis goodies.  Seasonal hot spiced apple juice was provided by Amanda and Gary Parker, as well as tea and cake.  All who attended agreed it was a great way of spending an afternoon, and are already looking forward to the next time.

Over the next season, Ron plans on organising five more one-day events, and details will be emailed and appear on the website.