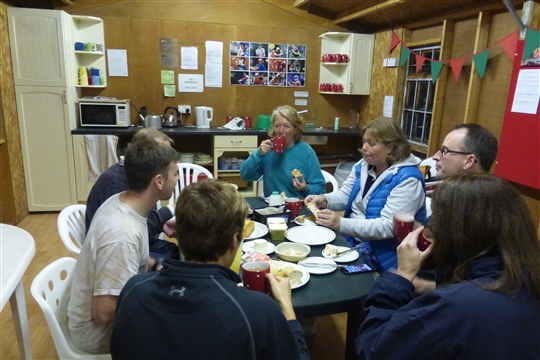 First up were Floodlit B (18/10/17), who travelled to Banbury - the drizzle was falling and the Michaelmas Fair was in full swing, as the Harbury B team of Helen Cooper, Nigel Eaton, Josh Marshall and Sue Panton arrived in Banbury for a Division 3 Floodlit league match. Following the successful opening match of the winter campaign, the team was mildly confident of a reasonable result even though Banbury Town were probably the strongest team in the league based on last year’s results. Unfortunately, about three hours later, and after a good post-match meal, a chastened team drove home through the mist having not won a set between them. However, even though the scores may look one-sided, the matches were competitive with many games going to deuce. However, the Banbury team had the edge in skill and won most of the close games.

The weather had deteriorated the following evening (19/10/17) when the A Team of Debs Brookes, Tamsin Frost, Ben Fish and Colin Mercer headed off in the same direction to play Kings Sutton B in a Division 2 fixture at Banbury West End's courts. On arrival there was a “robust” discussion between captains about whether the match should start, but it did! The heavy rain eased for a while but returned during the second round and there is a certain aesthetic beauty when each shot is accompanied by an arc of water spray! Anyway, good result with a 2-2 draw to remain unbeaten!

Weekend A's match (21/10/17), had to be postponed due to injury / unavailability of players, but as "Storm Brian" was passing across the UK that weekend, this was probably very fortuitous!

Floodlit B were up again next (25/10/17).  The weather had calmed down again, and it was a lovely evening for winter tennis - mild and calm.  The Harbury team, playing at home, comprised Helen Cooper, Nigel Eaton, Josh Marshall, and Sue Panton, whilst the opposition were Deddington B, the other team besides Banbury to be relegated last year from Division 2. The match was very hard-fought with most of the ties being close. The overall advantage switched back and forth between the teams but neither side could maintain the advantage and, in what was a fair reflection of the evening, the match finished as a draw at four sets each. Refreshments were then enjoyed by all (pictured).

Weekend B (28/10/17) - Travelled to Tysoe for their second match of the season.
Due to squad rotation and illness, only Joe remained from the Harbury team who had hosted the Tysoe team a few weeks earlier. He was joined by Jane and Caroline, both playing in their first match of the season, and Michal playing in his first match for Harbury.
Joe and Michal took an early lead in the first set, but a change of tactics by Tysoe saw them recover to take the first set.  A long second set ended with Harbury taking it on a tiebreak.
The ladies meanwhile, had completed their 2 sets (both won by Tysoe) and were considering starting  on the tea and cake while they waited.
Harbury's fortunes changed in the mixed doubles, Jane and Joe won both sets and Caroline and Michal tied 1-1 - resulting in the match being tied at 4-4.

Weekend A (05/11/17) - Colin, Nigel, Helen and Sue P travelled to Towcester, unfortunately recording their second 3-5 loss of the season.

Floodlit A (08/11/17) - Ben, Debs, Steve and Caroline hosted Middleton Cheney A.  While most people were wrapped up in umpteed layers, Chris from MC, was playing in shorts and t-shirt!  The tennis was fast and furious, ultimately resulting in a draw ... in every rubber and even in the total number of games which each team won.  4 sets all; 38 games all.  We look forward to the return match in February.