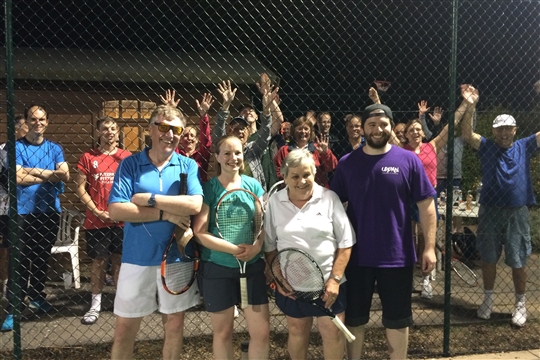 Sun, hot coals and a World Record.  The Tennis Club annual BBQ Tournament struck Gold with a record 28 participants. This meant a schedule of 28 matches played at speed from 6.30 until nearly 10.30 and eating on the run.  The dreaded 'play-a-let' rule caught out a few but 139 games later we had winners Mary Thompson and Marcus Sharpe basking in triumph in the warm evening over gallant runners-up Jane Minchin and Steve Fitzgerald.  BBQ Master Keith Thompson managed to keep the coals firing and supporter Mark Clifton wielded the tongs with aplomb as he turned rather than burned the sausages and burgers to perfection.  Another welcome guest Rosemary Harley kept us entertained and the whole evening was a grand, good humoured success.