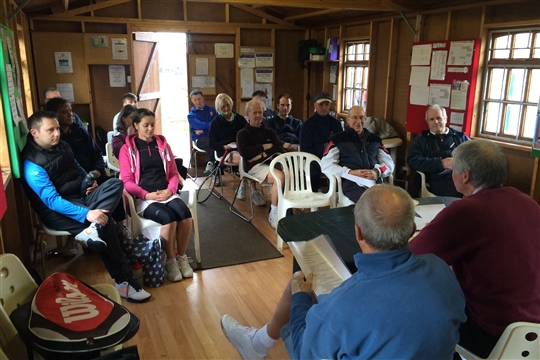 ‘Pay to Play’ and drama on the courts

The cunning plan to run a fun tournament called ‘The Chequebook’ was a painless way to extract subscriptions from members.  It was a great success!  Not only did the sun shine, but bank balances were emptied willingly for the very reasonable (no increase) subscription for 2016.

Twenty hopefuls were paired using the Walshie spreadsheet/seeding/thumb-in–the-air approach.  It proved to be exceedingly close with countless tie-breaks.  Simply to decide who from three pairs went through to the semi-finals needed a committee, a calculator and a re-count. As usual the ‘play a let serve’ caught out a few, and the cruelty of the sudden-death deuce to decide close games was also felt by some. But good humour prevailed.

The semi-finals continued the evenness of the competitors with both need tie-breaks to decide the outcome.  Karen Bristow and Nigel Eaton defeated Sue Panton and Peter Rollason by 3 points, whilst new committee member Olly Wiltshire and honourable treasurer Paul Crowton were beaten by a sudden-death deuce on the tie-break by Helen Cooper and Steve Marshall. One-point agony!

The final was also dramatic and needed yet another tie-break to settle it. Helen and Steve were the narrow winners.