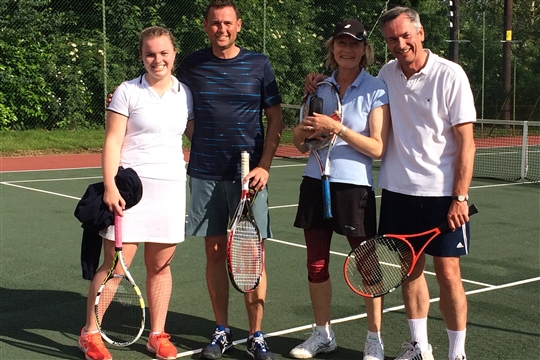 In the wake of the referendum on Europe, Brexit fever was momentarily banished by Hendreds tennis club’s 2016 summer tournament which took place in Saturday 25th June.

Instead, competitors focussed on getting themselves to the correct courts to start their quest for tournament silver.  Seven handsome trophies were once again looking for new owners in singles, doubles, mixed doubles and junior competitions.

The weather threatened to disrupt the day’s play and the committee made last minute changes to the scheduling to account for this. Sure enough, the rain arrived late morning. Despite court changes and rain delays, the players performed magnificently and completed all 48 matches. Fortunately, three gazebos provided welcome shelter from showers at the club courts, whilst elsewhere, competitors were able to huddle under trees.

Games were peppered with entertaining points. One player admired that such a great standard of tennis is played in a relatively small club, and added ‘I’ve enjoyed every match’. Though one or two were shortened, most games were completed, Jason Riley steadfastly sweeping the club courts to accelerate drainage after the heaviest deluges.

Over on the junior’s court, excellent tennis was also played and Philippa Waddington noted that they were a fantastic group and conducted themselves admirably. Once the junior competition had concluded, with a tie break played for second place, the adults made use of the extra court to catch up on matches. At their own volition, some of the juniors gamely stepped in as ball tenders, delivering a near Wimbledon experience!

The final match of the day was the Mixed Doubles, for which the sun shone and an audience gathered. As the thriller drew to a close, Pimms was served courtside before the evening barbeque at the clubhouse.

The silverware was presented to the winners of the day with runners-up earning a tube of balls for their efforts. George Eyston was this year awarded the McKinnon Shield for admirably holding court in an otherwise all-female field. John D’Alton was presented with a photo canvas of himself in action, in recognition of his love of the game over many years and his service to the club. The coveted Mixed Doubles trophy went deservedly to Lucy Taylor and Tom Raban.

Post supper, the juniors bided their time on the field in Glastonbury-esque conditions, their patience eventually rewarded with a de rigeur game of rounders. Adults fielded first whilst the juniors notched up their points. The adults barely had time to respond before the next shower set in . . .

“Great tennis matches, delicious BBQ and salads and excellent weather conditions for children to get mucky in. We loved it!”

Special thanks to James and Angus Wilson-Macdonald and Charlie Clayton who worked as a team to ensure that a mountain of sausages and burgers were cooked to feed the masses as the showers continued sporadically through the evening. The Committees’ appreciation too to all the court owners who kindly hosted matches throughout the day.

The event undoubtedly has a special place in the heart of the tennis community reflected in this final comment, “all members of the Merry family loved it! Great tennis matches, delicious BBQ and salads and excellent weather conditions for children to get mucky in. We loved it!”