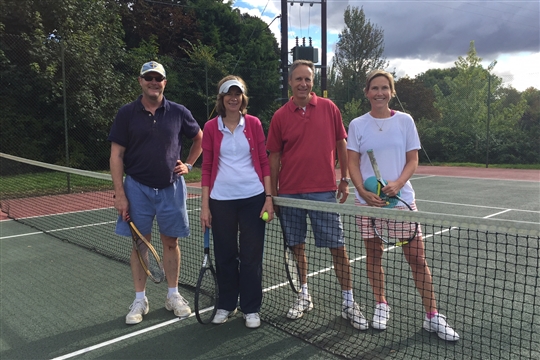 Preparation for Hendreds Tennis Club’s autumn tournament began long before the players turned up on a fantastic October Sunday morning. With planning in place, the competition once again upped its game, offering players fresh coffee and tea, pastries and generous bacon butties before kick off, not to mention a mean Bloody Mary at finals time. What was not to like? Leading a small team, Philippa Waddington and Richard Farrant knew how to get the party started.

Despite the breakfast provided, the players were still hungry for competition and were directed to one of four courts used for the occasion. Four couples on each court played a round robin, meaning that everyone enjoyed a full morning’s tennis and with some interesting results.

Having won all of their matches, Aisling O’Keeffe and Jason Riley found that Thomas Zipfel and partner Dee Jones went through to the semis having amassed a greater number of games. Other court winners of the morning were Lorraine Clayton and Simon John, Juliet Nicholls and Johnny Dewar and Nicola Merry and James Spurgeon. Nicola and James went on to beat Lorraine and Simon in the semi-finals with Juliet and Johnny also securing their place in the final.

The entertaining grand finale was a close run thing at three games all before the decider was played. Merry and Spurgeon broke the tie to win the final game in style. They were thrilled to take the winners’ prize of a meal for two at the Eyston Arms. They will be sharing their dinner with their respective spouses, also keen tennis players but unable to make the event this time.

The committee took the chance to thank Katy Denne for having been a brilliant Membership secretary.
Katy has stepped down from the committee with Aisling O’Keefe taking on the role. Katy left with her arms full, not just of her two trademark terriers but with flowers and the grand raffle prize; a juicy 3kg joint of beef with wine to boot.

Other lucky winners were Juliet Nichols and Suzette Wilson-Macdonald who had drawn the eventual winners’ names from the sweepstake. And all this before most had sat down to Sunday lunch. Perfect.