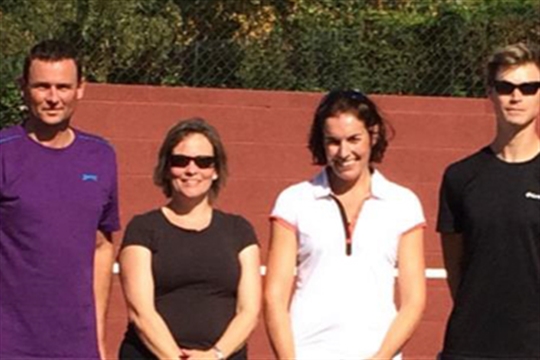 Just after nine o’clock in the morning, as the autumn dew eased itself off the Sports club field and the sun slowly began to make its presence felt, the Hendred clubhouse filled with the sound of easy chatter. Thirty-two players gathered to eat bacon butties and discuss, amongst other things England’s last minute defeat to Wales in the pool stage of the rugby World Cup. They also hoped to discover which of four courts they would be competing on in Hendreds tennis club’s Mixed Doubles tournament.

Lips smacked, raffle tickets bought and racquets at the ready, the competitors headed off in the direction of the courts located at the club, Hendred House and Cowdrays. Each court hosted four couples playing three rounds, consisting of seven games. Many of the games were closely fought, often to sudden death on first deuce. During the course of the morning four sets of semi-finalists emerged following some terrific tennis and a great deal of laughter from some quarters!

Ollie Tabor and Catriona Galbraith beat Helen McAlister and Ed Boddington 7-5 in the first semifinal. Jason Riley and Aisling O’Keefe defeated John McAlister and Sally Boddington, 6-4 to secure their place in the final. At the close of play, Ollie and Catriona, both of Letcombe tennis club, finished up as overall winners of the tournament having pursued an effective game plan.


The competition, organised by Philippa Waddington and Richard Farrant, owed its success to the fabulous competitors and in no small way, the glorious weather. Thanks also to the Eystons and Wilson- Macdonalds for the use of their courts and the committee for staging the event. A mention too for the very patient youngsters who occupied themselves during play and who also gave a helping hand when asked. The next event will be a quiz night in November, details of which will be circulated in October.