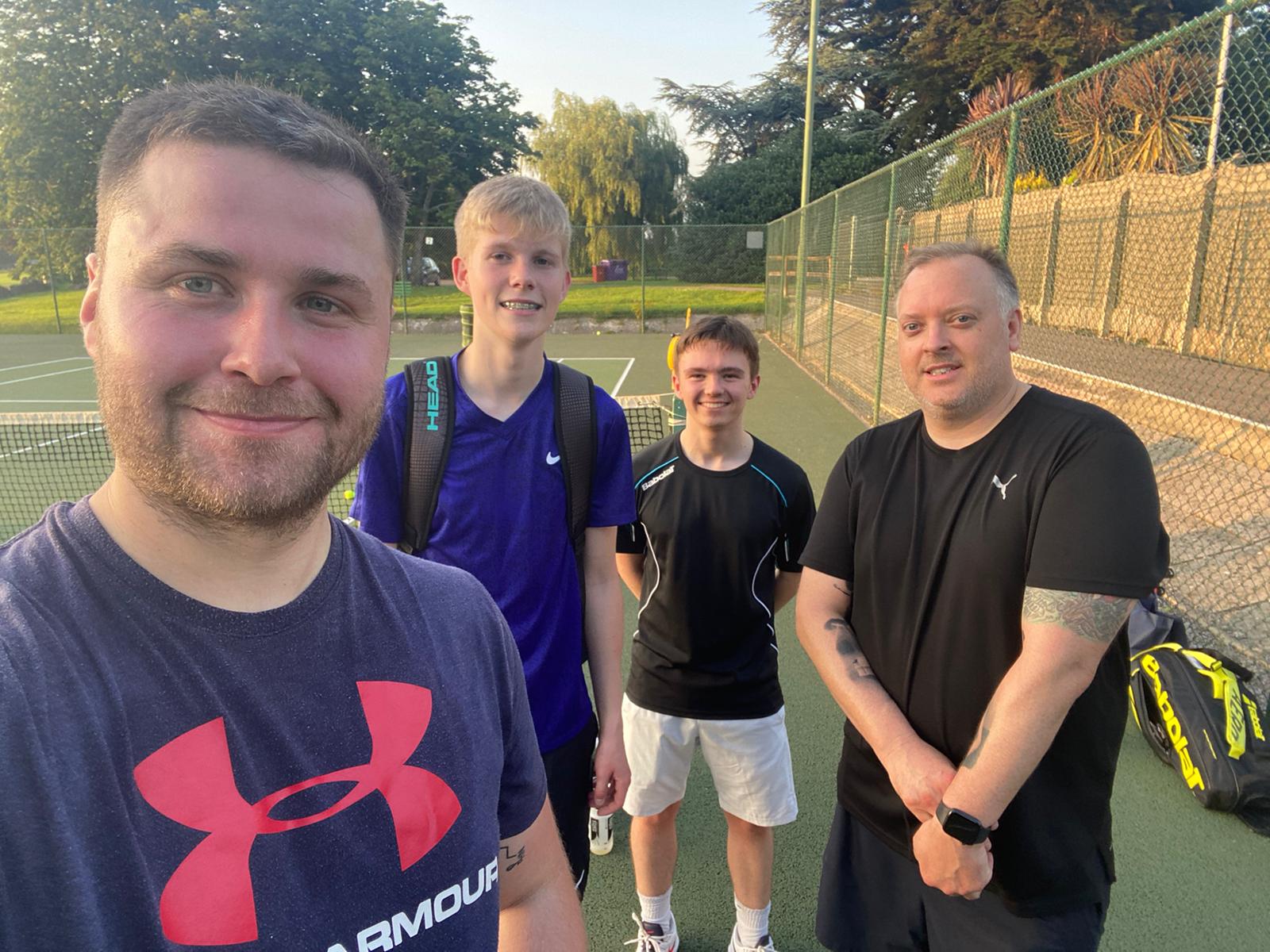 Somer Valley Tennis has finally reached the end of its summer league adventures in the Avon Tennis leagues, it has been a roller coaster of a ride with the weather, court availability and player injuries, family commitments and committee volunteers all involved in getting 36 members out every week to be able to field 9 teams, with NO exception everyone has ‘done their bit’ said Chair Bryn Jones and ‘ we have all thoroughly enjoyed it – well mostly !’

We owe a big vote of thanks to Chilcompton Sports Ground, as they have provided us with courts every week, with five home teams most weeks we have had to ‘overspill’ teams from our home base of Writhlington Sports Centre.

1sts men lost 0-10 v Backwell A tough night for the firsts against a very strong Backwell side, who have just secured promotion in the division after tonight’s result. The 10-0 score line did not reflect the quality of the tennis from both pairs tonight.

Sam Peryman/Ollie McGee struggled to find a rhythm and either hit blinding winners or unforced errors.  Ewan Allman/Darren Thompson had a tough start, with their second pair probably being the stronger of the two on the night. The second rubber was far more competitive for Ewan and Darren against their first pair, with the shot of the evening going to Ewan who returned a smash behind his back for a winner. Darren also played superbly at the net all evening.

Overall though, the firsts were comfortably beaten tonight. Onwards and upwards for next season! Big thank you to all those that stepped up for the long away trip as the last game of the season in the scorching heat.

2nds lost 0-10 v Cotham Park With the regular players of this team being unavailable and promotion secured, Somer Valley fielded 3 new players Alan Gammon, Lee Wood and Tom Craig to make up their team so it was going to be a tough night.  Alan and Lee worked hard but lost both rubbers 6-0. 6-0 and 6-0, 6-0.  Tom C was partnered by the regular Tom H and had a little more joy, especially after the pairing switched to serve and volley and getting to the net whenever possible, they lost 6-0, 6-1 and 6-1, 6-2.  Consolation came for the Somer Valley team already having enough points from earlier in the season to come 2nd in the division placing them in the second promotion slot.

3rds won 10-0 Lansdown.  -  We hosted Lansdown at Chilcompton Sports Ground for this top of the table clash, where a win would seal promotion for us. Chris Cox teamed up with his regular partner Graham Steer, and despite a slow start they took the win after a 3rd set tie break against the opposition “A” pair. Their second match was a more comfortable straight sets win. Although a new partnership Adam Benney/Tony Honecker played as if they were regular partners and only dropped 6 games in total during straight sets wins against both pairs.  With maximum points won tonight the 3rds are promoted to Division 7!

Thank you and congratulations to all of those involved in the 3rds this season. Division 7 beckons for us now and with this group of players we can approach next season full of confidence.

4ths won 10-0 v - Sodbury With captain Bryn Jones still injured, Mike Cuthbert/Sam Harris partnered up and won both their rubbers easily with Sam displaying some amazing backhand winners.  Payman Fathi/Ray Clarke had some close matches with their second rubber going to a 16-14 championship tiebreak, this means the 4ths will safely stay middle of the table and that division for next year.

5ths lost 0-10 v-Almondsbury A very youthful and ‘tall’ team were the opposition for the ‘mighty 5th mens’ who have faced fierce opposition all season, but with stalwarts of Neil Scott, Richard Hood, Greig Shearer and Kevin Stephens, the team played valiantly on, but lost all their matches. The hero of this great group of men must be Tom Craig, their captain who has kept these chaps together all season, despite the losses!

Ladies 1st win 8-2 v Knowle  Our last summer league match for 2021 was played at home against Knowle.  They sent a strong team so we had to be at our best as we all wanted to finish on a high with a win. We beat them 8-2. Said Mandy Baldwin coach and player ‘it has been a tough division to play in this year but my thanks go to all the ladies that have stepped in and played for the 1st team – a true TEAM effort’ we are 2nd in the top ladies division in the Avon league.

Ladies 2nd won 8-2 v Thornbury Due to Rachel Gibbs late arrival just before 7pm, the opposition claimed the first set.  Starting in the second set, neither Lucy Burnmingham nor Rachel really got into the match, but managed to scrape a win 0-6, 7-6, 1-0 (championship tiebreak which went to 11-9).  The second rubber had Lucy and Rachel playing better tennis against a harder hitting pair.  Some good rallies were enjoyed and we won 2-6, 6-7.

Louise Derrick/Sally Rawlings took on the harder pair first and didn’t quite match the them losing 2-6, 3-6.  They had no problem with the second rubber however winning 6-2, 6-2. The 2nd remain in their division with some solid performances from all the regular players

Lades 3rd lost 4-6 v Crescent It was a glorious sunny evening to finish the season,. The ladies 3rds travelled to Crescent, one of the friendliest teams in the league, and enjoyed some long rallies in very hot conditions.

Tracey Stephens/Marie Craig won the first set on a tie break and closed out the second set quite quickly, winning decisively then unfortunately in their second rubber Marie injured her leg and was forced to retire and concede the rubber.

Jane Benny/Jenny Perez lost to the mother/daughter pairing Lynda and Rachel who have played strongly together for many years then after losing the first set in a tie break to Chris and Liz came back with energy and determination to win the second set and a convincing championship tie break to give Somer Valley four well deserved points leaving us in a safe third position in the table.

4th Ladies 10-0 w/o Unfortunately Kings were unable to put out a team this week giving our
ladies 4ths 10 points in a walkover but whether this is enough to save them from relegation remains to be seen when all the results are entered on the website.