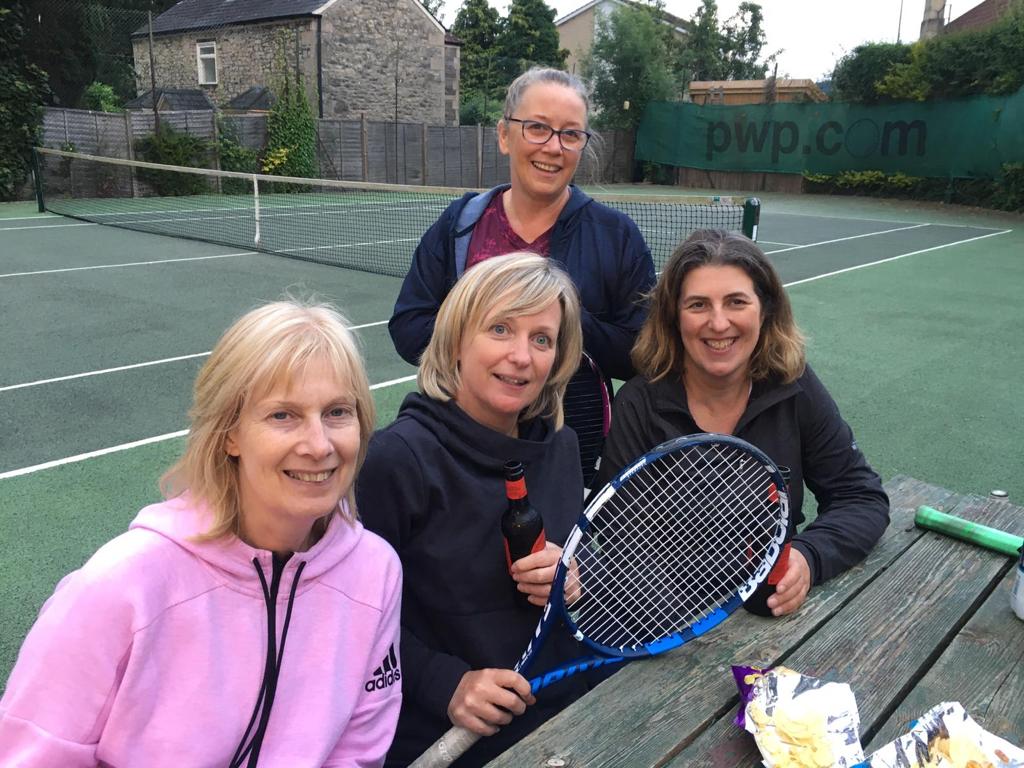 A turnaround for the men this week with three wins and two losses.  As we head towards the last few matches of the season, it will become clear where the promotion and demotion will come.

The ladies had four teams playing this week, one win and three losses :

1st Ladies 6-4 win v Kings TC. A top of the table clash between Somer Valley and Kings TC (Bristol) saw 4 ladies playing as the 1st team pairing Ali Blackett & Elly Sherman are two of the top lady players in the county, so pitted against Mandy Baldwin/Francesca Beg, everyone knew it was going to be ‘game on’.  After some unbelievable tennis and three close sets, Mandy & Francesca lost in the 3rd set.  Meanwhile Eleanor Nobbs/Alex Hull comfortably beat their second pair 6-0,6-0.

In the reverse rubbers both Francesca and Mandy similarly beat the second pair 6-0,6-1,  Eleanor and Alex unfortunately couldn’t take a set from the Kings 1st pair, but on count back Somer Valley edged the match in games, well done the 1st ladies !

2nd Ladies 2-8 loss v Kings TC  Utilsing the courts at Chilcompton and indoors at Dragonfly Leisure, Christine Hunt/Lucy Burmingham had a close first rubber but lost 1-6 4-6 whilst Janie Bullus paired for the first time with Lis Leatham against a strong pair first pair.   The first King’s pair were very strong serve volley but very enjoyable to hit against. Losing 0-6 0-6. Janie /Lis lost 3-6 1-6 but managed to take the seconds to 3 sets to clinched a win for 2 points.

3rd Ladies 0-10 loss v Saltford TC the score did not reflect the effort put in by the 3nrd team ladies this week, playing on the outdoor courts at Chilcompton Sports Ground, Jane Benney/Mandy Stonier lost their first match badly, but rallied in the second rubber only losing 1-6, 6-7, taking the top of the table team close to their first defeat.  Fellow players Tina Lindley/Ali John did not get much traction in their matches and sadly lost both.  All played in a very friendly way, we wish Saltford good luck with their promotion, they deserve it.

4th Ladies 0-10 loss v Bath TC The 4ths played away at Bath Tennis Club, the opposition drafted in a fourth lady last minute who turned out to be a very strong player. Both rubbers played against their stronger pair, resulted in 6-0, 6-0 loss.

Rubbers against their second pairing resulted in more games for us but unable to convert any sets. So a 0-10 loss for the 4ths. Bath are a really friendly team & we really enjoyed playing them despite losing.

The mens teams had a much better week, with all five teams playing, three wins and two team losses.

1sts won 10-0 v Knowle - Despite Jon Doel having a "dodgy ankle", Nathan Jackson and Jon still whipped both pairs, with Patrick Lodge/Sam Perryman doing a double doughnut on the B pair, and winning a tight 3 setter against Knowle's A pair. Jon and Nathan are now the best pair in the club, with a win rate of 90% and 88% respectively.

2nds won 8-2 v Downend & Frenchay – Luis Jauregui and Ollie McGee knew the A pair were tiring, so decided on a 3rd set against the A pair at 9.30, but the lights went out soon after, despite being assured they could stay on as required! They reluctantly agreed to a tiebreak in the gloom, and won, to complete a double win for them! Darren Thompson and Andy Jeffery lost a very tight championship tiebreak against the A pair, but an 8-2 win at Downend is very welcome when you compare it to a 5-5 draw earlier in the season.

3rds won 8-2 v Kings- Both pairings of James Brocksopp/Richard Chapman and Sam Harris/Mike Cuthbert had easy wins against the B pair, and tight championship tiebreak matches against Kings A pair. Sam and Mike, stepping up to the 3rds for the first time this season, very narrowly lost theirs 11-9, and huge credit goes to them for almost making it a 10-0!

4ths lost 2-8 v Congresbury- This was a tremendous result against stiff opposition, with Payman Fathi/Richard Hood gaining the points with a championship tiebreak winner against the A pair. Neil Scott/ Steve Sakakini were our other pair.

5ths lost 10-0 v Cotham Park - This division is very strong, and Cotham Park are vying for promotion. However, Tom Craig/Greig Shearer took a set off the B pair, a great achievement! Alan Gammon/Lee Wood completed the 5ths line-up.