10 of the Strangest Moments in Tennis 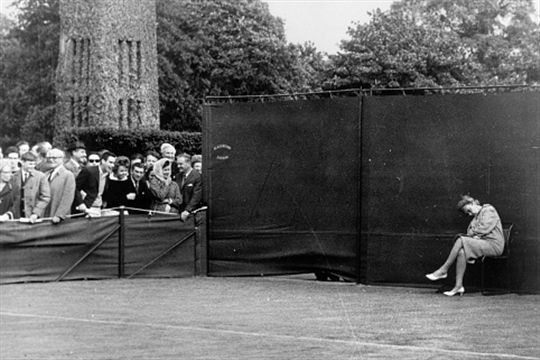 Whoever said that tennis was simply a matter of hitting a ball over a net and keeping it between the lines? Never has the phrase ‘expect the unexpected’ been more appropriate. I present to you some of the contenders for the strangest moment in tennis:

In 1957 Maria de Amorin of Brazil served 17 consecutive double faults at the beginning of her match against Berna Thung of the Netherlands at Wimbledon. Surprisingly, despite Miss de Amorin missing 34 serves in a row, the score in the first set was only 6-3 in Miss Thung’s favour as the Brazilian managed to secure 3 breaks of serve! Commendably de Amorin was able to regain her composure and take the second set, levelling the match at one set apiece. However her nerves resurfaced in the final set and Thung eventually claimed the match 6-3 4-6 6-1. In the post-match press conference, de Amorin confessed to those assembled, ‘I was very nervous’.

On Wednesday 27th June 2012 Sara Errani completed her first round match at Wimbledon in just 7 seconds without even hitting a ball. Rain had interrupted play the previous day, with Errani just one point from victory against the American, Coco Vandeweghe. 18 hours later the players returned to Court 16, where the crowd watched them warm up for the resumption of play. Vandeweghe then served a double fault and the players met at the net to shake hands and exchange a smile. Errani progressed to the second round with a 6-1 6-3 victory.

At the Australian Open in 2011 Agnieszka Radwanska got the shock of her tennis life when her racquet broke in extraordinary fashion as she attempted to return the serve of Kimiko Date-Krumm. Who knew the Japanese player’s serve had such power?! As Radwanska hit her backhand return her racquet snapped in half, leaving her with just the handle – and a somewhat bemused expression!

At Wimbledon in 1964 one of the line judges, Dorothy Cavis-Brown, actually fell asleep during a match! South African player Abe Segal later recalled that it was a very hot day and he was leading the match 6-2 7-5 5-2 when at match point his American opponent, Clark Graebner, hit a ball down the line which landed, according to Segal, ‘about 12 inches or so out’. Segal jogged up to the net for the handshake but Graebner, with a smile on his face, pointed out that although both players knew that the ball was out, the line judge had to actually make a call. Cavis-Brown was slumped in her chair fast asleep. A ball boy failed in his attempt to wake her and the crowd began to laugh. Segal walked up to her, crouched down and shouted ‘out’ in her ear. He later described the moment saying, ‘She wakes up with a start, shouts “out” and falls off her chair.’ He joked, ‘That’s what always happens – when I play, people fall asleep.’ The incident made a splash in the next day’s newspapers along with the revelation that the umpires had held a cocktail party on the opening day of the tournament. Despite Cavis-Brown’s insistence that she had only had a ‘small gin’ that morning, the umpires have not had a cocktail party since!

5. A Lack of Appropriate Equipment

Goran Ivanisevic was once forced to withdraw from a tournament after he smashed all of his racquets in anger and then realised that he had none left to play with. This now infamous tantrum happened in 2000 at the Samsung Open in Brighton, in his match against Korea’s Hyung-Taik Lee.

He destroyed his first racquet after losing his serve to trail 6-5 in the opening set. He received a warning and disposed of his racquet at the change of ends. In the third set Ivanisevic broke his second racquet, playing on with a cracked frame for another point to avoid a second warning. However in the next game, after serving a double fault to take the score to 15-40, Ivanisevic demolished his third racquet, receiving another code violation warning and losing the game as a consequence. He was then forced to call for the event supervisor Gerry Armstrong to confess that he now had no racquets left in his bag and was unable to continue with the match. An announcement was made to the crowd informing them that Ivanisevic could not carry on due to a ‘lack of appropriate equipment’.

Caroline Wozniacki got her hair caught in her tennis racquet during her second round match against Aliaksandra Sasnovich of Belarus at the US Open in 2014. Her braid became tangled around her racquet as she made her follow through on her forehand. The unfortunate Danish star still attempted to return her opponent’s next shot, but her efforts were in vain. Nevertheless Wozniacki did not let it faze her and went on to win the match in straight sets, 6-3 6-4. She later explained that her hair often used to get caught in her racquet but she thought that she had solved the problem by braiding it! She said, ‘It’s a first, you know, when it’s braided that it’s been stuck that good in my racquet… I still tried to hit the ball. Almost took my head off.’

In 1974 Illie Nastase played a couple of points at Wimbledon while sheltering under an umbrella after it started to drizzle. The match had already been interrupted several times by the rain and as a joke Nastase grabbed an umbrella from one of the spectators and played on one-handed. Many people thought that he was perhaps guilty of trying to put his opponent off his game with his antics but Nastase has clearly stated that this was not his intention. He later wrote, ‘I thought we should go off, but to dispel the tension I thought it would be fun to play a couple of points with the umbrella in my hand.’ He described it as ‘completely spontaneous’, commenting that having entertained the crowd in this way made him ‘really proud’ as he had made a lasting impression on people that was ‘not just about tennis, not just about arguments, it was also about the fun.’

Alize Cornet was left red-faced after her mobile phone rang just as she was facing a match point at the Swedish Open in 2011. Her opponent Caroline Wozniacki was a set and 5-3 up with the game poised at 40-30 in her favour. She was about to serve when a phone began to ring. Both players looked around suspecting that the disturbance was being caused by somebody in the crowd. The TV camera then zoomed in on Alize Cornet’s bag and a sheepish Cornet had to go and rummage through her belongings to locate and silence her phone. Laughing to hide her embarrassment, the Frenchwoman scurried back to the baseline, holding her hand up to apologise to her amused opponent. Perhaps the incident did temporarily distract Wozniacki, as Cornet went on to break her serve, but the Dane ultimately regained her composure, winning the set 6-4 and claiming the match.

In 1969 at the US open in Forest Hills, back when the tournament was played on grass, the tournament referee used a novel method to dry the muddy court – using a low flying helicopter to create a drying wind.

Rod Laver was waiting to take to the court against Tony Roche in the men’s singles final, just one match away from completing the calendar year Grand Slam for the second time. The match had been delayed for some days due to rainy conditions. In one of the women’s semi-finals Virginia Wade and Margaret Court had worn socks over their pumps in an effort to gain some grip on the slippery turf. Despite the best efforts of the helicopter pilot, Rod Laver actually changed his shoes to ones with spikes, after he was broken when serving for the opening set. Despite the soggy conditions Laver ultimately rallied to take the match 7-9 6-1

Venus Williams and Svetlana Kuznetsova had a fun match in 2015 when they were joined on court by possibly the best ball boys in the world? Or at least the cutest anyway! The organisers of the tournament in Auckland hired a rescued Bullmastiff called Oscar, a Border Collie named Ted and a Jack Russell/Norfolk Terrier/Miniature Schnauzer cross called Super Teddy to retrieve the balls for the players. They were dressed for the part with sweatbands on all four paws. They performed really well, apart from one minor mishap which resulted in Kuznetsova having a bit of trouble taking her towel from a reluctant ball dog.