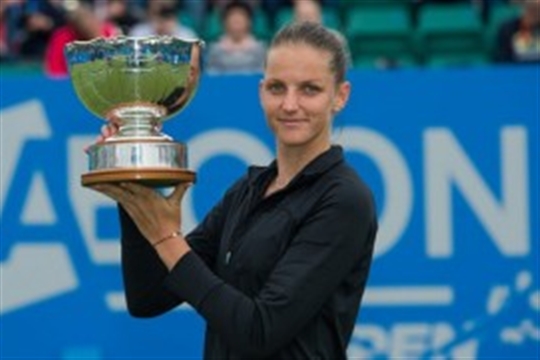 What a weekend at the Nottingham Tennis Centre as Karolina Plíšková defeated her in-form opponent Alison Riske 7-6(8) 7-5 to be crowned the Aegon Open 2016 champion!!

The start of the match was delayed due to rain but it was well worth the wait for this world-class final. Plíšková got off to a great start in the opening set, racing to a 3-1 lead only to be pegged back to 3-3 as Alison Riske capitalised on some great returns. In an incredibly close first set Plíšková saved multiple set points to eventually claim the opener in a tense tie break 7-6(8)! The opening set took four minutes longer than Plíšková’s entire semi-final match!! In the second set Riske broke to lead 4-2 but again the Czech fought back levelling at 4-4. Riske then broke again and served to take the match into a decider but once again she was pegged back. The American was forced to serve to stay in the match at 5-6 and Plíšková ultimately proved too strong, taking the decisive break to claim her first WTA title of the year and lift the Elena Baltacha Trophy here in Nottingham.

After the match World number 17 Karolina said, “It was not an easy match, she also deserved to win and it was down to a few points. I am really happy that I made it and closed it out in two sets. I am really happy and my week couldn’t have been better. I have been coming here a few years, I know the city pretty well and it’s my first time wining the trophy here so I enjoyed it.” – Her twin sister Kristyna had previously won the Aegon Trophy event here in 2014 so now both sisters can claim success on the beautiful grass courts of Nottingham!! Alison Riske also enjoyed her time here in Nottingham tweeting; 'Thank you for a wonderful and memorable week Nottingham - I love you!'. She also amusingly commented on the size of the champagne bottle she received as runner-up;  “I’ll never understand why the finalist gets the smaller size??!! They got it all wrong.”

The weather was a tad damp earlier in the day and unfortunately the planned doubles exhibition match with 1987 Wimbledon champion Pat Cash, local girl and current player Jocelyn Rae, Former British number one Anne Keothavong and 1987 Wimbledon mixed doubles champion Jeremy Bates could not take place. However all was not lost as the players took part in an extremely entertaining Q&A session with the crowd.

The doubles final was moved to Court one so as to fit in both finals during the brief break in the rain during the afternoon. The unseeded pair of Andrea Hlavackova and Peng Shuai claimed the title in a super-close encounter against fourth seeds Gabriela Dabrowski and Yang Zhaoxuan, winning the match tie break 10-7! The winners seemed quite excited about their giant bottles of champagne!!

Sunday was the conclusion of a great tournament week here in Nottingham but do not despair as there’s plenty more great grass-court action to come with the ATP & WTA players arriving in the city very soon for the 2017 tournament.