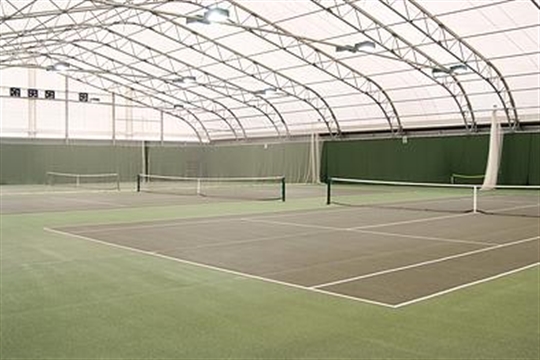 Starting out as a small, friendly club, Lane TC  thrived and over the years it changed and improved.   One of the major improvements saw the “New Clubhouse” being built on Coroners Lane in 1936 with gas lighting and, in 1950, the addition of an extension  to include a bar and toilet area  The club boasted two, and later three Red Shale Courts and four Grass Courts, although the Grass courts were very rarely used due to the weather!   The Club had a big membership and regularly attracted more than a hundred people on “Gents Tea Day”.

The Grass Courts were sold to pay off the loan for the third Shale court and so the size of the tennis grounds was reduced.

In 1987 three all weather Tarmac courts were installed to replace the Red Shale courts.  The membership increased rapidly and following a successful Open Day we ended up with over 120 members.   It soon became clear that three courts could not sustain this membership and with Junior membership growing as well we were faced with a dilemma.

There was only room for a maximum of 4 courts on the Coroners Lane site and various attempts to increase the number were rejected by town planners. The only option was to seek an alternative site.

After much searching and planning, Halton BC offered us the possibility of relocating to a piece of land between Sts Peter and Paul Roman Catholic High School and Widnes Golf Club. Our 20 year search for a new home was complete.   The site offered everything we needed.

The result was the construction of Widnes Tennis Academy, a fabulous facility with a purpose built Clubhouse inside a structure containing 3 indoor courts and 6 floodlit outdoor courts and an affiliated gym attached.

The club provides top class coaching for all ages and abilities in addition to catering and bar facilities.

In 2020 mwe will be having new LED floodlighting installed min our indoor court area and in addition, mour 4 tarmac courts outdoors are to be re-painted.

Lane Tennis Club is, of course, still a very significant part of the new academy.

​Membership is competitively priced and open to all. We have numerous teams, ranging from Under 8's to Veterans and everything inbetween, competing in local, county and national competition and we also hold an annual ClubTournament.

At the time of writing the club holds many titles and are Cheshire County Champions in Gents, Ladies and Under 18 Girls categories. We regularly host our own, as well as County and National tournaments and we have, thanks to our excellent coaching staff, produced many County and National champions at various age groups.

With a long history behind us we now look forward to even bigger things in the years to come. Becoming a member of this fantastic club means you will be joining one of the most progressive and successful clubs in the North West of England. We would love to welcome you!

Choose a Halton Venue to visit