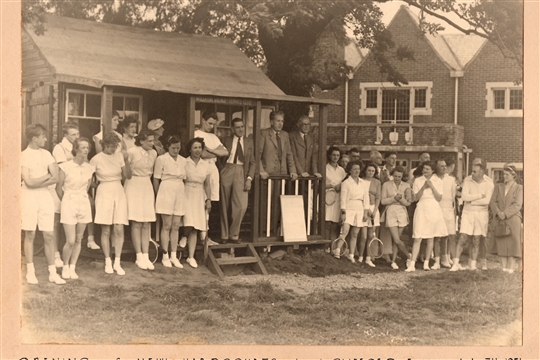 Wollaton Village Tennis Club came into existence at a general meeting in the village institute on 4th April 1932.
Seventeen founder members played tennis that year on two grass courts laid out at the south end of the Wollaton Cricket Ground.

Membership was limited to thirty players and the annual subscription of ten shillings per member had to cover a rent of £3 per year to the Cricket Club and a fee of £4 to the groundsman for a whole season’s work of cutting the grass once a week and marking the lines twice a week.

The name “Wollaton Village Tennis Club” was adopted at the club’s inaugural meeting in 1932 to distinguish it from Wollaton Tennis Club which had two grass courts in the paddocks alongside the Wollaton Canal, now in the vicinity of Moorsholm Drive. The club at the paddocks ceased at the outbreak of war in 1939 and never recovered.

The first ‘pavilion’, a hut – suitable as a changing room was bought for £10 from the Parkside Allotment Holders’ Association and was conveyed by ‘horse and dray’ to the site of the club. This rendered the club rule No.2 unnecessary, that ‘members and visitors should come dressed as for tennis’.

In 1961 Mr J W Bowman, President of the Tennis Club, opened a spacious new pavilion which replaced the tiny, intimate hut. The cost of the new pavilion, £1,400 was paid off over three years and it is recalled that the Nottinghamshire LTA helped with a low interest loan over that period of fund raising.

In 1977 a red coloured rubberised polymeric surface was laid directly onto the asphalt by Charles Lawrence and Associates of Newark. This was in continual use until 1993 when the courts were re-levelled and re-surfaced, again by Charles Lawrence, this time in ‘Tennis Top’. This was partly funded by a grant from the Foundation for Sports and Arts.

Floodlights were installed in 1997 on two of the three courts, enabling evening tennis to take place in the winter.

The Club In The 21st Century

The club enjoys a mixed membership and enters two men’s teams, one ladies team and one mixed team in the Nottinghamshire LTA Leagues and also a men’s, ladies' and mixed team in the Winter League.
The Club is progressive and is involved in the Schools Link Initiative Club.

In 2002, planning permission was sought for floodlighting the third court but this was not granted. The committee tried again in 2017 and this time, with an amended proposal to limit the light pollution to neighbouring houses, permission was granted.

There has traditionally been a thriving Junior Section. Teams were entered for several leagues and the club had been very successful in this area for many years, either winning leagues or finishing high in the league tables.
Club trophies were competed for annually for: Under 12, Under 14, Under 18 and there was an on-going Ladder Competition, though in recent years junior membership had fallen after the departure of the club's coach.
However, the juniors are now feeling the benefit of regular coaching from LTA registered coaches through the club's coaching partners ACE Sports Coaching (ASC) and membership numbers are increasing.