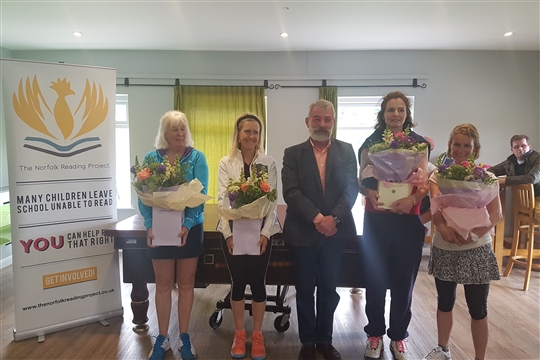 A grey and breezy day greeted 20 pairs of ladies from all over Norfolk and north Suffolk. They were divided into four boxes of five pairs playing a timed round-robin with the top eight pairs going through to a knockout competition.

The final was a one tie break set which saw the Cromer pair prevail 6-4.

Beautiful bouquets, provided by Libby Ferris Flowers on Grove Road, Norwich were presented to the winners and runners-up by proprietor Phil Smale.  Thanks must go to EATSC for providing the venue, Hannah & Sharon for a delicious lunch and Derek Perry for orchestrating proceedings.

£300 was raised from the raffle with proceeds once again going to The Norfolk Reading Project – www.thenorfolkreadingproject.co.uk