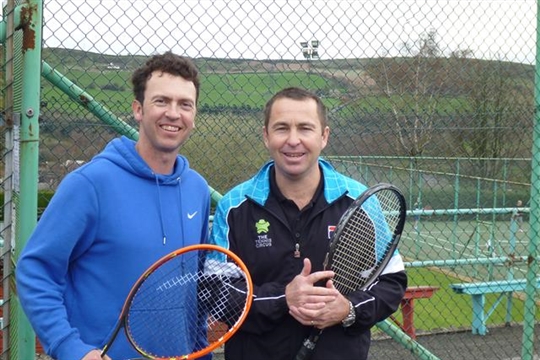 Former British Davis Cup team members Luke Milligan and Danny Sapsford will be the star attractions at a special Open Day which is being staged by one of Gloucestershire’s leading tennis clubs on Sunday 15 May.

Luke and Danny will be at Frampton on Severn Tennis Club on 15 May to provide a range of coaching master classes for players of all abilities and ages, as well as playing an exciting exhibition match for spectators.  The event promises to be a great fun day out for the whole family  - aside from the main attractions focusing on Luke and Danny, there will also be a table tennis tournament, bouncy castle fun, a barbeque and drinks to suit all tastes.

The day begins at 10 am with coaching sessions for children followed by sessions for non-league ‘social’ players and then members of Frampton’s ladies’ and men’s teams.  The exhibition match will follow at approximately 2pm.

Frampton  Senior Club Coach, Jason Boon, explains how the club managed to attract the two stars to Gloucestershire for the day :

“Eight of our club members played against Danny and other former Davis Cup players, including Jeremy Bates, in February when we took part in a 24 hour tennis marathon at the National Tennis Centre in Roehampton to help raise funds for the provision of access and tennis facilities for disabled players at Frampton.  We received some great tips about improving our game and we were absolutely thrilled when Danny subsequently offered to link up with Luke and come down to Frampton on 15 May to provide guidance to many others at the tennis club.”

“These guys are great ex-professionals with top coaching tips which I am sure will inspire our club members to improve their game.  Danny recently oversaw a squad of British boys who won major international singles and doubles titles, and Luke rose to prominence as the coach of leading British player Laura Robson. But it’s not just about tennis coaching - the exhibition game should attract a big crowd of spectators.  We will also be providing a range of extra attractions – and some great food and drink - to ensure that families will have a fabulous time.  Admission will be free and we are hoping for an excellent turn-out.”

Danny played on the Association of Tennis Professionals (ATP) Tour from 1987 to 1999, reaching a career high ATP singles ranking of 170 for singles and 83 in doubles. He represented Great Britain in the Davis Cup from 1990 to 95. Danny competed in all four Grand Slams with his best performance coming at Wimbledon in 1999 where he made the third round before losing to eventual champion, Pete Sampras. In 1998, Danny became the Men’s National Singles Champion, and he also won the doubles event on three separate occasions. During his career he recorded wins over players such as Tim Henman, Greg Rusedski, Brad Gilbert and Gustavo Kuerten. After retiring Danny became an LTA National coach, overseeing a squad of boys who won European singles and doubles titles, Grand Slam and International Tennis Federation World Doubles titles, and junior/senior National singles titles.

Luke reached his highest individual ranking on the ATP Tour in 1996 when he became the world number 217, after winning through to the third round at Wimbledon. In the same year, he represented Great Britain in the Davis Cup. Turning to coaching in 2003, Luke he has developed several top British players including Laura Robson, Arvind Parmar and Anne Keothavong.  He has worked with top coaches including the legendary Nick Bollettieri, who has mentored many tennis greats including Andre Agassi, Boris Becker, Martina Hingis, Monica Seles, Maria Sharapova, and Venus and Serena Williams.

To book a coaching session with Danny and Luke Please click here and scroll down to the bottom of the page.