As many of you may know, Elspeth Harding retired as the Tennis Club’s Secretary at last month’s AGM. Unbelievably, she had filled this role for 10 years and guided 4 Chairmen and numerous Committee members through the intricacies and mechanics of running and building the Club into what it is today. 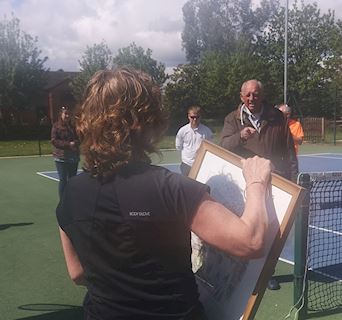 In addition, she has been and still is a valued member of the Ladies League Teams, regularly joins in the Club Social Evenings and plays with the Tuesday and Wednesday Ladies Groups.

In 2017 she was named ‘Volunteer of the Year’ by the Gloucestershire LTA in recognition of all she had contributed to our Club.  In fact, Elspeth did far more for the Club than her role demanded and along with her husband, John  -  who was always on hand to provide practical skills, maintenance and BBQ abilities par excellence  -  they have both supported the Club over the years in so many ways.

As a token of the Club’s  appreciation and in recognition of her long-standing support and service, a picture of The Wool Barn in Frampton, a particular favourite of hers,  was especially commissioned by local artist, Jane Fryer, and was presented to Elspeth by Chairman, Bob Roberts, and the Club Committee on 5th May. 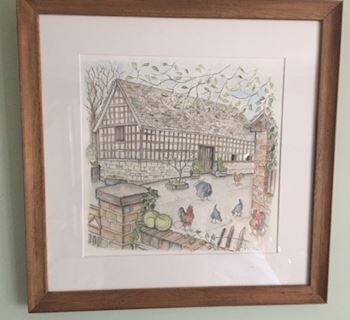