The History of Alkrington Tennis Club 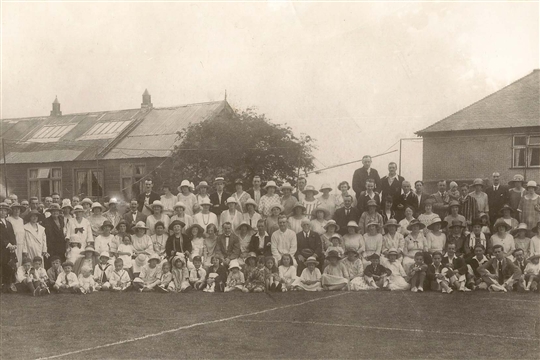 Alkrington Tennis & Social Club was founded in 1922, the same year the BBC was formed.  King George V was the reigning monarch and, at around the same time that he officially opened Wimbledon's famous Centre Court, we were opening our own courts and clubhouse to the local community for the very first time.

The club was built by a group of residents in Alkrington Garden Village on land leased from the developers of the then rapidly expanding Alkrington estate.  The purpose of the club then was as it is now, to provide sports and social facilities for the local community - a place where people could keep fit, socialise and have fun.

Following the Second World War the club was able to purchase the land on which it was built, the club now owned by its members via its trustees.

When the club first opened back in 1922 the courts were shale, a surface that remained right up to 1980, a point in time when the club went through a significant transformation.

The upper storey of the orignal clubhouse was rebuilt to provide an improved bar and social area and the traditional shale courts were replaced by all weather hard courts, a surface which remains the club's preferred option today.

Since then maintaining and improving the facility has remained a prime objective of the Club's Committee, which has, overtime, added a practice wall, floodlights, a fifth court and mini court to its offering.

In 1997 the Club celebrated its 75th Anniversary by issuing a commemorative mug and having a celebratory party that brought back together members spanning many generations, some of whom had travelled great distances to reunite with friends and reminisce.

Today the  Club is in its 90's and we already have one eye on our centenary - a very special occasion, a centenary we will share with the BBC and Wimbledon's Centre Court.

In the meantime we will continue to do what we have always done  since day one of the club i.e. strive to promote the sport of tennis, serve our local community and provide a first rate facility - a place where people can keep fit, socialise, have fun and make new memories and new friends.