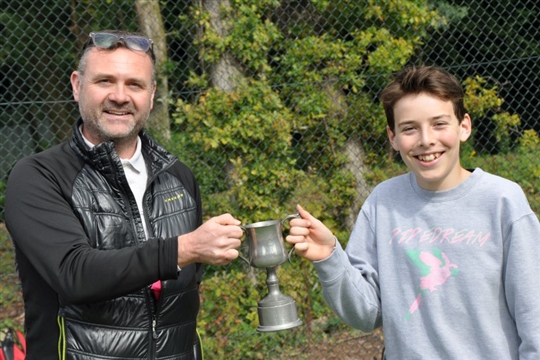 The first match to be played was the Men’s Singles Final. The battling duo was Tony Symons-Hicks & Will Jowett with Will managed to pull out some winning shots and finally won the match.

Next on the programme was the Ladies Doubles Final. Twins, Erin & Caitlin Piper  played Caroline Jacobson & Lucinda Anderson. Although thirteen, the twins have just won the Welsh Schools Junior Championships and are serious competitors at the Club. So, this was a match of youth versus experience. In the third set, Erin & Caitlin took the lead and won with some excellent tennis play!

Then the Ladies Singles Final with Robyn Davies & Trinity Edwards. Both girls’ played tenaciously and it was a shame that one had to lose.  However, Robyn seized the day and won in two sets.

The Men’s Doubles Final followed and again another match not to be missed. Simon Stokes and Mike Shipman took on Tony Symons-Hicks and his son James.  It was the Symons-Hicks team who went on to win in two sets.

At this point in the tournament, trophies were awarded to the winners & runners up of the matches by the Club Chair, Leigh Caveney.  Also, awarded were trophies to junior players in various categories. The Club Coach, Tony Symons-Hicks presented awards to:

Thomas Holroyd for being the Boys 2017 Box League Champion

Katie Gardener also won the tournament's Fair Play award for her tenacity & being the Girls Runner-Up.

Once the excitement was over, the Men’s Doubles Plate Final was held on court. Playing in the final, were Luke Gillard & Sam Lynn against Rhys Hill & JJ. Lynn. (Sam’s brother). It was an exciting game, with Rhys Hill & JJ. taking the lead to win in three sets.

Next match on court was the Mixed Doubles Plate. This award was introduced into the championships this year and the first time a match has been played. It was a family affair, with the players being Alison & Russell De’Ath (husband & wife) against Olivia & Luke Gillard (brother & sister). Both sides were determined to win, but in the end it was the De’Ath’s who won in a thrilling third set.

The last match to be played as the weather deteriorated, was the Mixed Doubles Final. This was the match everyone was waiting to see.Tony Symons-Hicks & Robyn Davies played  James Symons Hicks & Rebecca Saunders. All players were determined to win, but James & Rebecca played some excellent passing shots and were able to take the lead, to win 7-5 in the third set.

The last match to be played, was postponed until the following day. The Ladies Doubles Plate, is also a new award and has been introduced this year. The players taking part were Diane Davies & Sue Lawson against Angela Whittle & Claire Baker.

With the competition over for another year, it was interesting to see how the juniors are coming through as competitors. They are unmistakeably talented and play with such determination to win, it is a pleasure to watch them on court. It certainly changes the dynamics of the tournament, but it also ensures that Lisvane Tennis club has a lot of excellent players now and in the coming years.